No more boredom in Valorant – Deathmatch between rounds and bots planned

The popular shooter VALORANT is missing two things: occupation during the waiting time in the solo queue and the practice with bots. Both functions could be added in the future in the FPS of Riot Games. Riot Games Software Engineer “tehleach” reveals this.

The reddit thread of user kryptic6868 has elicited new information from an employee of Riot Games. Software Engineer “tehleach” reveals that the developers at VALORANT are working on a solution to include deathmatches in solo queues during waiting times. 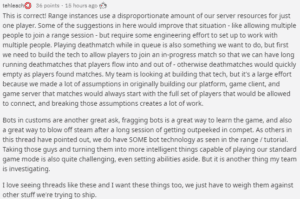 “Playing deathmatch during the queue is also something we want to do”, says tehleach and explains why there might be an option for deathmatch mode between solo matches in the future. “First, we need to develop the technology to allow players to join in an existing match.” He says it is important that the deathmatches last a long time and that players come and go during them. Otherwise the respective deathmatch would quickly become understaffed as soon as the players join their solo game.

“My team is preparing for the development of this technology,” emphasizes tehleach. But he says it’s a big effort, because the presets in VALORANT are programmed so that the players start directly into the solo match as soon as the lobby is full. “Breaking these requirements requires a lot of work,” says tehleach.

In addition to the planned deathmatch function, tehleach also talks about a possible introduction of bots in individual matches. “Fragging bots is a great way to learn the game,” says tehleach. The bots currently behave exactly as in the tutorial. According to tehleach, it will be a challenge to program the bots intelligently: “My team is also doing research on this.