In professional sports, talent promotion is one of the most important aspects of successful future planning. League of Legends is no different. The LEC teams and their Academy offshoots in the German-speaking Prime League are showing the entire Esports world how well the development of young talent can work.
In the recent past, League of Legends publisher Riot Games has transformed the structure of European LoL-Esports. It has been a process that has benefited talented young players and any organisation that wants to promote them.

In national leagues such as the Prime League for Germany, Austria and Switzerland, young players are built up alongside veterans. There they hone their skills. If everything goes according to plan, these talents will eventually move on to the LEC, the highest European LoL league, where top teams such as G2 Esports play.

Strong rookies convince: Europe’s talent factory
In the LEC, ten European rookies have been used in the current Spring Split alone so far, while two other players had only completed one or two assignments in the LEC before this split. All of these rookies were previously promoted in national leagues in Europe.

In total, 21 of the 54 current LEC professionals have moved up from a national European league to the LEC this year or last year. This strong balance shows that talent promotion is the basis for almost all European top teams.

Prime League moderator and LoL expert Jona “JustJohnny” Schmitt is an advocate of this approach. In an interview with esports.com, he explains: “The LEC and also the EU LCS before it always did well that we had an incredible number of rookies who were at an incredibly high level. The whole world envies us for that, except maybe the LEC.”

The strongest performers in the current Spring Split so far have been the rookies from Misfits Gaming and the MAD Lions. In the Lions, all LEC newcomers came from teams from the German-speaking countries before the season. 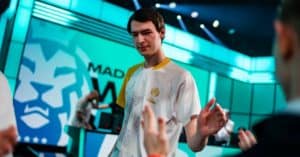 Especially Matyáš “Carzzy” Orság (in the article picture) is doing very well so far. The Czech won the European Masters in September 2019 with the German team BIG, in which the best teams of the national leagues participate twice a year. So the organizations in the Prime League are doing quite a bit right.

The league introduced at the beginning of the year is probably the strongest among the national competitions in Europe on paper. Here, talented players play alongside ex-LEC stars such as Petter “Hjarnan” Freyschuss, who help them to develop with their experience. Anyone who can convince in the Prime League and at the international European Masters is a candidate for the LEC.

“The Prime League is great for young players,” Johnny is convinced. “Especially because there are a few old warriors in the meantime. This mix helps. If you play with a Hjarnan or Freeze on a team, you can learn a lot as a young player very quickly.”

Schalke and Co. use Academy teams as support
Organizations such as the MAD Lions, Team Vitality, Misfits Gaming and Rogue have recently used their Academy lineups in national leagues to add talent to their LEC team. Two German organisations, namely SK Gaming and FC Schalke 04, also use this approach.

While SK already pulled Toni “Sacre” Sabalić and the German Janik “Jenax” Bartels from their own Academy team SK Gaming Prime last year, FC Schalke 04 is currently using the resources of its Academy team to fight its own LEC crisis.

Johnny sees the Academy team as particularly useful in such crises: “In the past, the LEC organisations have actually only ever used their Academy players when things were going badly. I believe that will remain the case. That was the case with SK back then and with Schalke now.”

Schalke 04 Evolution plays in the Prime League and is clearly one of the best teams there. Consequently, two talents have been rewarded for their achievements so far: Lukas “Lurox” Thoma and Nihat “Innaxe” Aliev have been deployed in the LEC to support the weakening Schalke lineup. For this the established professionals Erberk “Gilius” Demir and Konstantinos-Napoleon “FORG1VEN” Tzortziou had to make way.

The changeover paid off quickly: With a sensational victory over champions G2 Esports, the royal blue team achieved their first success of the current season.

Promoting talent is already a matter of course in the European League of Legends. The introduction of the Prime League and the general strengthening of the national leagues underline this fact. Other leagues in LoL and other Esports titles can definitely take a leaf out of their book.