Hogwarts Legacy: Meet the most important professors of the wizarding school! In Hogwarts Legacy, you will soon be sitting in on various lessons. We tell you which teaching staff you can expect in which subject and take a closer look at the background.

The things you can do in Hogwarts Legacy are almost as important as the wizarding school itself. Various lessons prepare your player characters for the challenges in the open world. So that you don”t run into the classrooms unprepared, we”ve taken a little closer look at the future teachers we know so far, as well as their history.


A particularly exciting fact is that the teacher names in Hogwarts Legacy also have a deeper meaning, as was the case with all the characters in the books. All of them give you clues about their personality and behaviour, and some even leave you guessing – as always in the Potter world.

The most unpopular headmaster at Hogwarts to this day (and former Slytherin) makes quite little effort to hide the utter contempt he feels for his students. A cantankerous, lazy and vain pureblood, he has a rather myopic view of the world and displays their classically condescending, unjustified attitude of superiority. As he is conceivably unsuited for the position of headmaster, he does as little work as possible and largely avoids the student body.

Instead, he focuses on his prestigious status in the wizarding world and his razor-sharp, well-groomed beard. He deeply detests Muggles, Squibs and Muggle-borns and disowned his son Phineas because he did not share his views on the superiority of purebloods.

Incidentally, after Black”s death, his portrait hangs in the headmaster”s office to give useful advice to future heads, but he shows little enthusiasm for the Muggle-friendly, eccentric Dumbledore. His second portrait is mounted in the headquarters of the Order of the Phoenix in Black House at 12 Grimmauld Place, Phineas later often travels between this and the picture hanging in Hogwarts to deliver messages or warnings.

Hermione Granger eventually hides the portrait from the Black house in her never-ending pouch to prevent Phineas from revealing its whereabouts to the new headmaster, Severus Snape, during the search for the Horcruxes. Harry Potter”s godfather Sirius Black and Bellatrix Lestrange are great-great-grandchildren of Phineas Nigellus Black. Although a proud pureblood, Phineas harboured little affection for the Death Eaters and was very happy to finally defeat Lord Voldemort.

Phineas is the Greek variant of the male Jewish given name Pinchas, which means “the Nubian”; the Latin word “nigellus” translates as “blackish”. Combined with the surname Black, this gives a triple variant of the word black. This suggests that Phineas may be the essence of what is important to the Black family, which is exceedingly concerned with blood purity, proud and ancient. 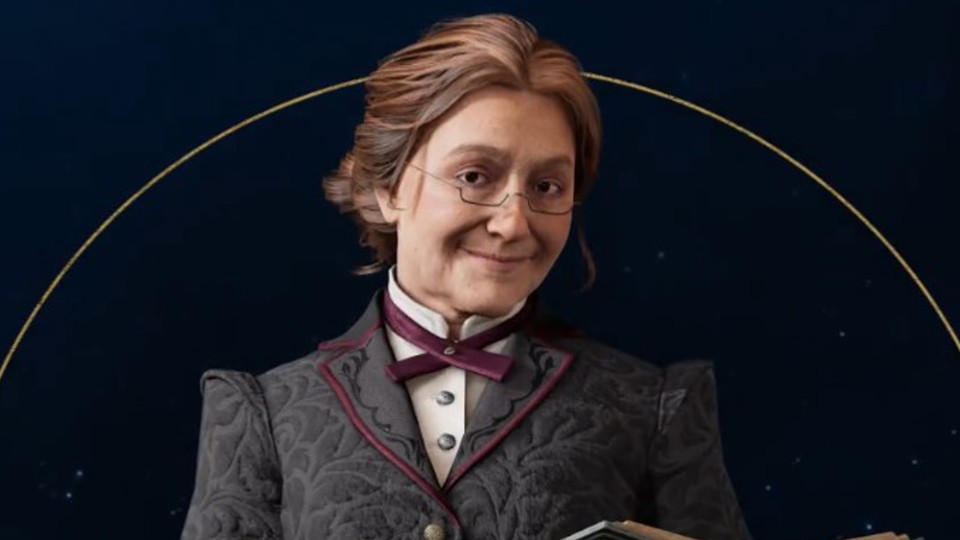 The former Gryffindor student is an exceptionally talented witch who worked as a curse breaker for the Ministry of Magic before her time at Hogwarts. Known for her composure and outstanding wand use, she is considered a tough but fair teacher in the subject of transformation as well as a somewhat intimidating, respected deputy headmistress.

Professor Weasley brings your player characters up to speed in their studies and explains the Wizard”s Field Guide and the Room of Requirement. Both are invaluable helps for new fifth year students, especially because they have so much to catch up on.

Matilda”s first name is made up of the Old High German words “math” and “hiltja” and combined means something like “powerful fighter”, plus she comes from one of the oldest pure-blood wizarding families, the Weasleys. Unlike the Malfoys, for example, the Weaslys attach little importance to their ancestry, the family name itself derives from the English term “weasel”.


In Great Britain and Ireland, weasels have an extremely bad reputation, they are considered insidious and are said to bring bad luck – according to J.K. Rowling, however, weasels are not vicious, only maliciously maligned. The Weasleys have a similar fate in the wizarding world, at least among purebloods. 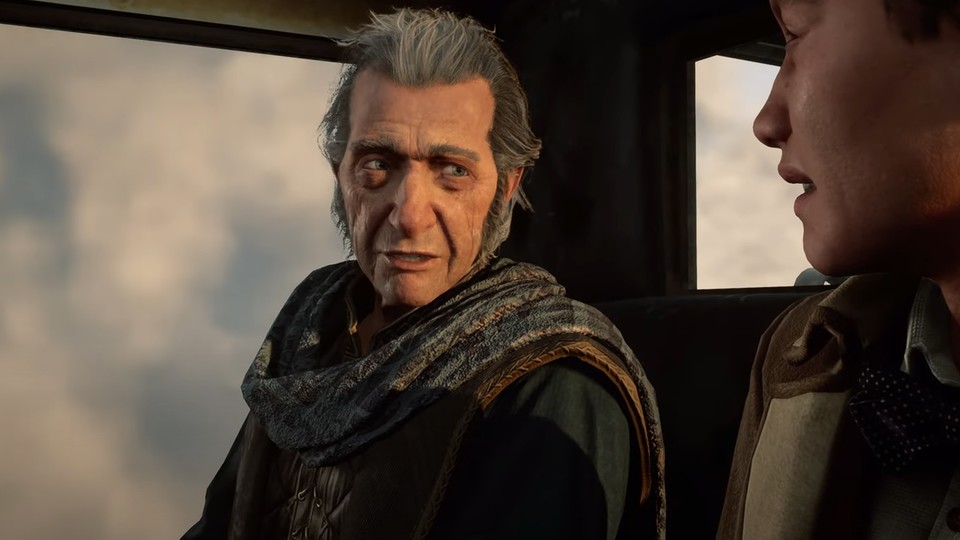 Originally, Eleazar Fig had put his desire to work for the Ministry of Magic on hold in favour of his wife Miriam and their research trips. But at some point he grew tired of Miriam”s search for the reason for the disappearance of Old Magic from the world and went his own way, working at Hogwarts as a professor of magic theory.

When Miriam died during their travels, Fig felt responsible because he had not been there to protect her. This guilt haunts him to this day; he is trying to find out why and how his wife died and wants to complete her work. A former Gryffindor, Fig is a kind, wise teacher and becomes one of your player characters” strongest allies during their time at Hogwarts.

The first name Eleazar is an English variant of the Latin name Lazarus meaning “God helps/has helped”, while Fig translates from English as “fig”. At first glance, the fig is unspectacular, but in Southern Europe there is a gesture that perhaps allows more conclusions to be drawn: there, if you put your thumb between your index and middle finger, it is called ”showing someone the fig”. This gesture is supposed to ward off all kinds of evils such as hexes and the evil eye. In India, the fig tree is also considered a symbol of luck, peace and vitality. So a lot of good omens for one of your characters” most important supporters! 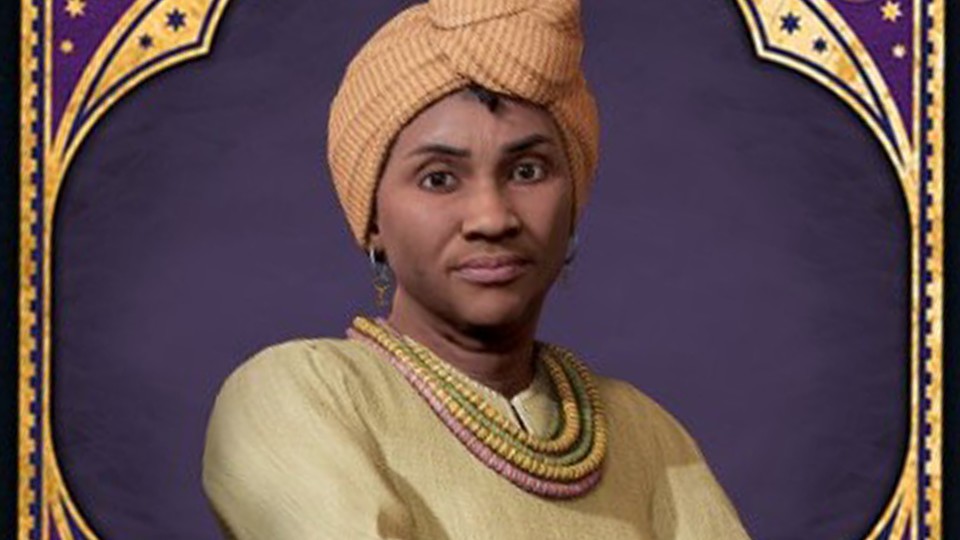 Before her apprenticeship in divination, the gifted seer trained young magic practitioners at the largest school for magic workers in the world, namely Uagadou in Uganda. Her faith in her gift was deeply shaken when her husband was murdered and she could not have foreseen this. She left her home with her daughter Natsai and joined the teaching staff at Hogwarts.

While she is capable of transforming into an African osprey as an Animagus, she no longer uses this ability after her husband”s death. Rather, you will see her casting spells without a wand.

Her first name, Mudiwa, is a term from the Shona language, spoken mainly in Zimbabwe, and means “beloved” or “darling”; the surname, Onai, also comes from Shona and translates as “seeing”. 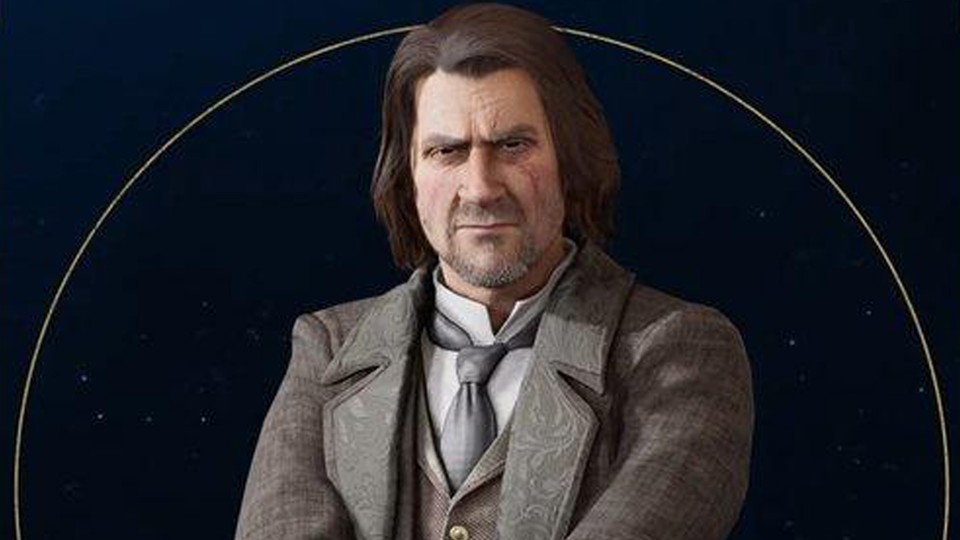 The Potions Vault will henceforth belong to the gruff and astute Professor Sharp, who had a long and successful career as an Auror until an injury made that work impossible for him. Not wanting to mould at a desk in the Ministry of Magic, Sharp now passes on his extensive experience with battle-worthy potions and elixirs at Hogwarts.

The former Slytherin is not easily impressed and expects a lot from his students, but is then proud of those who excel in his potions classes and master the demanding curriculum.

The professor”s first name is derived from the ancient Greek fabulist Aesop, whose instructive parables look at human weaknesses with a clear eye. Although the English term “sharp” is usually translated as “keen”, other synonyms include “bright”, “cunning” and “biting” – both words characterise quite well a demanding, clever and grumpy teacher. 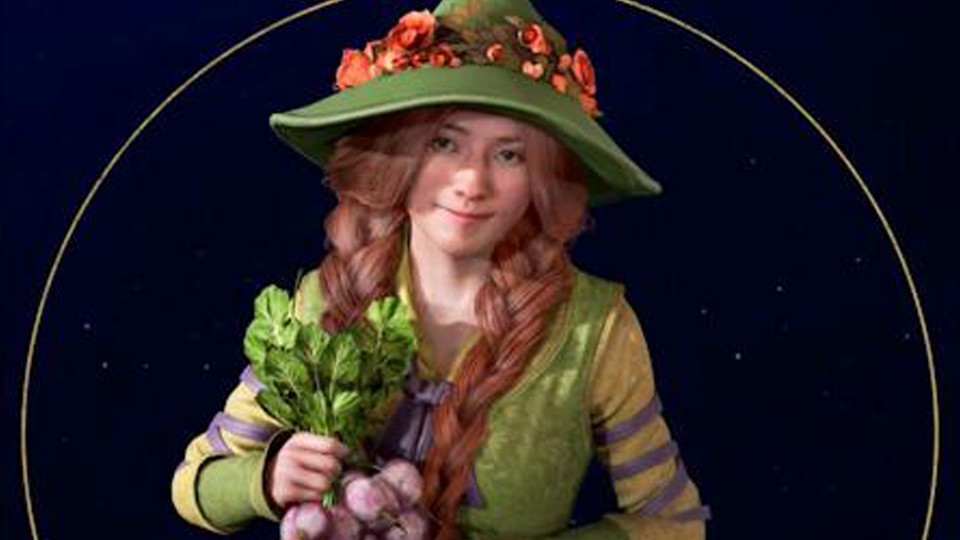 The London-born Herbology teacher grew up in a Muggle household, but didn”t really feel at home until she was a student at Hogwarts and in Hufflepuff House. As she describes it herself, it was only at the famous wizarding school that she really blossomed and discovered her extraordinary affinity for magical plants.

Her sunny demeanour and flowery language are popular with colleagues and students alike. Although some fear she might one day move on to another greenhouse, Mirabel would never leave Hogwarts – even if the right witch came along, she would have to love the school as much as Professor Garlick does.

The borrowings in the teacher”s name are the clearest in the play so far: on the one hand, mirabelles are firm-fleshed, very sweet tree fruits, but the name also derives from the Latin “mirabilis”, which translates as “wonderful” but also “whimsical”. Garlick adds a k to the English word “garlic” for “garlic”, garlic is used as a medicinal and cooking plant. Incidentally, in the Middle East garlic is traditionally regarded as a repellent plant for the evil eye, although it is better known for the claim that you can keep vampires away with a garlic necklace around your neck.

Abraham Ronen – The Art of Magic 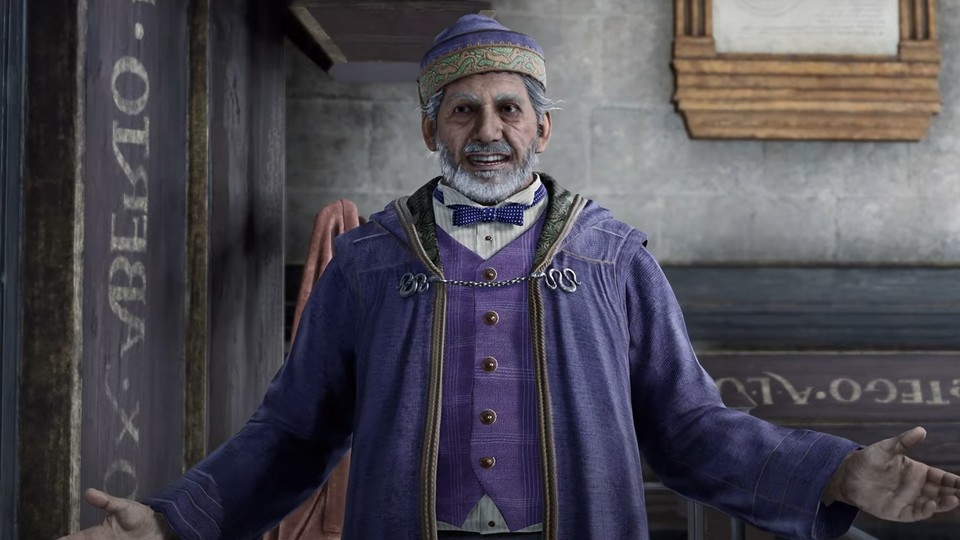 The teacher of magic presents himself as jovial and cheerful and considers the friendships and extracurricular activities of the Hogwarts Eleven to be as important as his subject itself. Before and during his years as a Slytherin at Hogwarts, he was taught by a rather strict father and therefore developed a particular fondness for games of all kinds, the goblin game being his particular favourite.

He is even said to have met his wife at a particularly exciting goblin stone tournament! To the delight of most students, he often incorporates games into his unorthodox teaching style.

His name also fits in with this: the first name Abraham, which comes from the Hebrew, means “father of many”, Ronen is a family name that is also Hebrew and translates as “joy”. 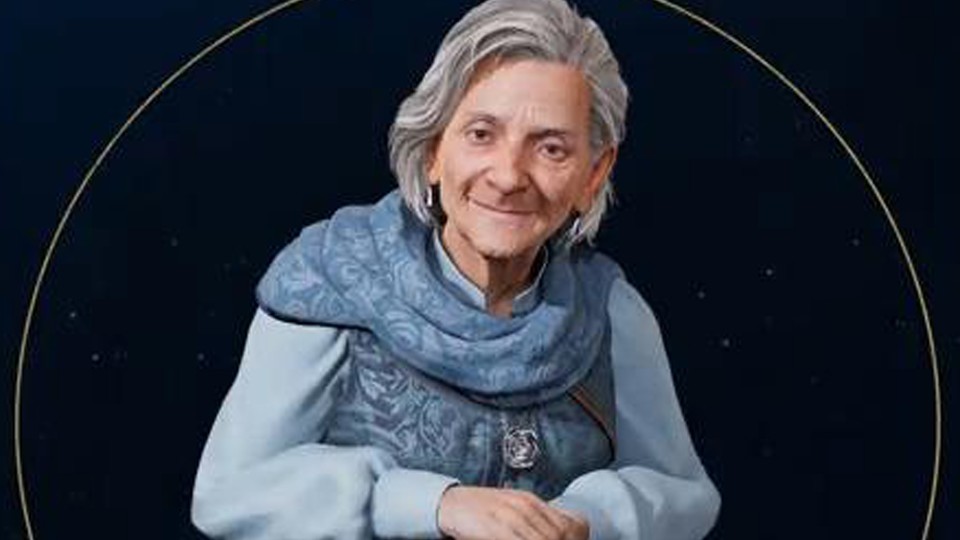 After a successful career in the Ministry of Magic, during which she was rumoured to have spent some time in the Department of Mysteries, Dinah Hecat retired and moved to Hogwarts as a Defence Against the Dark Arts teacher.

The serious but personable Hecat takes her teaching job very seriously and seems very happy with her work at Hogwarts. Some, however, suspect that the former Ravenclaw”s very practical teaching method is due to her innate desire for action.

Her first name Dinah comes from Hebrew and means “the righteous one” or “the judge”, the surname can be derived from the Greek goddess Hecate, who was worshipped as a goddess of magic, theurgy and necromancy. Incidentally, a small clue to Hecat”s possible focus of work in the mystery department lies hidden in Hekate”s other creative areas, as she was also the goddess of crossroads, thresholds and transitions and the guardian of the gates between the worlds.

By the way, we have listed all the spells we know so far in the overview linked above. Which teachers are you looking forward to the most? Or is there another teacher in Hogwarts Legacy that we haven”t mentioned but you”re interested in? Feel free to let us know in the comments!