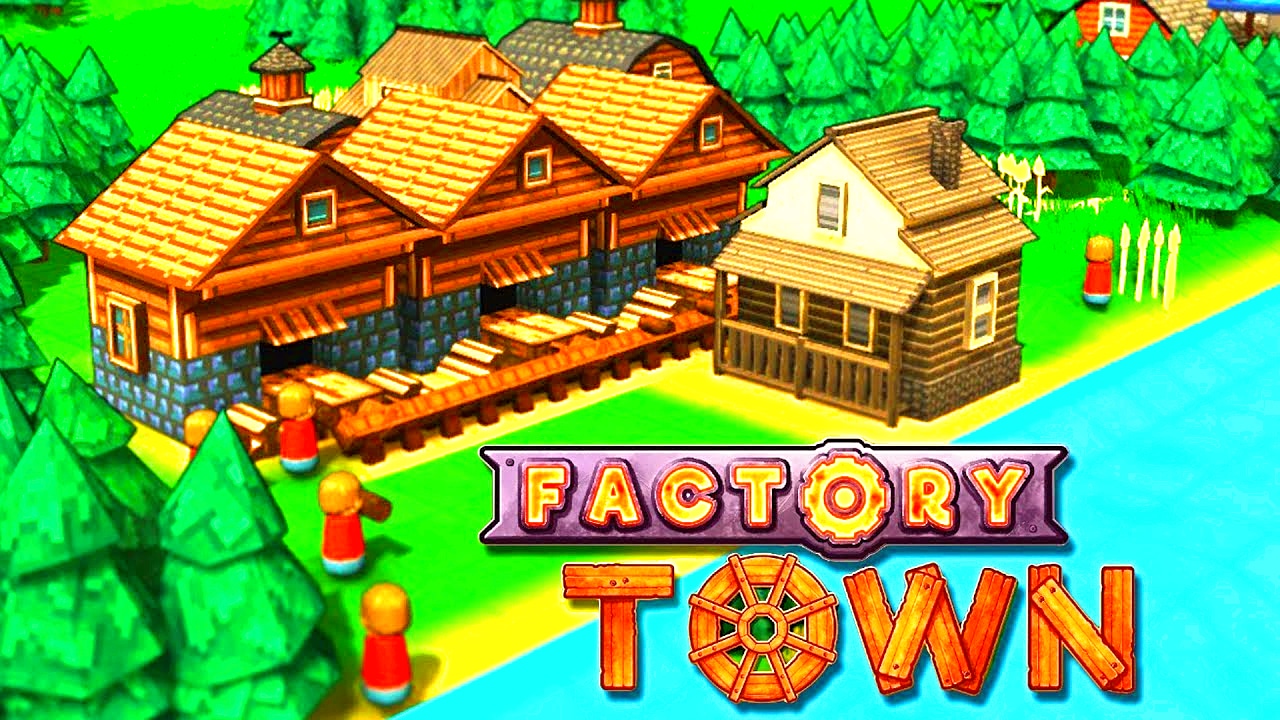 Slowly the coal ball rolls down the chute, gets faster and faster, shoots down a hill, lands on a wooden conveyor belt. It continues leisurely onto a conveyor belt made of fabric. At a T-piece, an ore ball joins them, and together they slide along a metal belt – straight into the forge. Seconds later, coal and ore are melted into a handy iron plate.

With three more plates, the journey continues, this time by cart. After a brisk road trip, it gets dark when our metal plate disappears in a crate. But only for a short time, then it lands on a railway wagon, the locomotive picks up speed and puffs towards a laboratory with wagons full of identical plates.

Fascinated, our plate watches as hopping males and females carry books with empty pages into the lab – and make a textbook out of our plate. By covered wagon, we make our way to the final stop: a school that generates industrial research points.

And that’s not all the transport options Factory Town offers you! Because here cargo ships and zeppelins still chug around, there are underground pipelines, simple Indiana Jones lorries and sophisticated sorting plates that filter, distribute and forward raw materials, intermediate products and finished goods.

This sounds a lot like Factorio, but Factory Town is not so technically sober. In the colourful blocky world, you supply your village with meals, drinks, clothes, craft supplies and so on, just like in a classic building game. There are no opponents, so there are no defences – in Factory Town, the main goal is transport.

The victory conditions, for example in the eight campaign missions, read dryly at first: produce X railway tracks, build a mine, achieve technology level X, make X inhabitants happy. And then, apart from the short tutorial, you are left alone – in a positive sense. Because Factory Town doesn’t chew the cud, but lets you work it out for yourself.
Theoretically, you can solve almost any task by letting your inhabitants do everything by hand: For example, picking tomatoes, milking milk, catching fish, chopping firewood, hauling everything to the kitchen, making fish soup and carrying it to the tavern. It looks cute when the workers bounce around like busy birds of a feather.

But it’s much more efficient (and cooler!) to automate everything. Because carts are faster and transport four goods at once, tomatoes are conveniently round and roll down a chute on their own, milk from the pasture comes from the underground pipeline, and Fritz’s fish move nimbly along an assembly line.

However, Factory Town often drove me crazy in the test at first. Especially in sloping terrain, i.e. on hills or lakeshores, building is often awkward. For example, conveyor belts have to be flanged to a production facility at a certain height – if it doesn’t fit exactly, you have to compensate with pillars or move the building afterwards. And because the individual terrain fields (tiles) are much larger than in the more detailed Factorio, it often gets tight, especially in the village itself.

In addition, your residents cannot climb over conveyor belts and slides. If you’re not careful, you’ll quickly have a figure “walled in”. They can be moved, but if they can’t reach their destination, even the cleverest conveyor belt won’t help. Bridges are a remedy, but they have to be built piece by piece with ramps and the like. And: Your inhabitants block each other at bottlenecks. In the beginning, we wanted to kick their butts – if only ladders had butts! 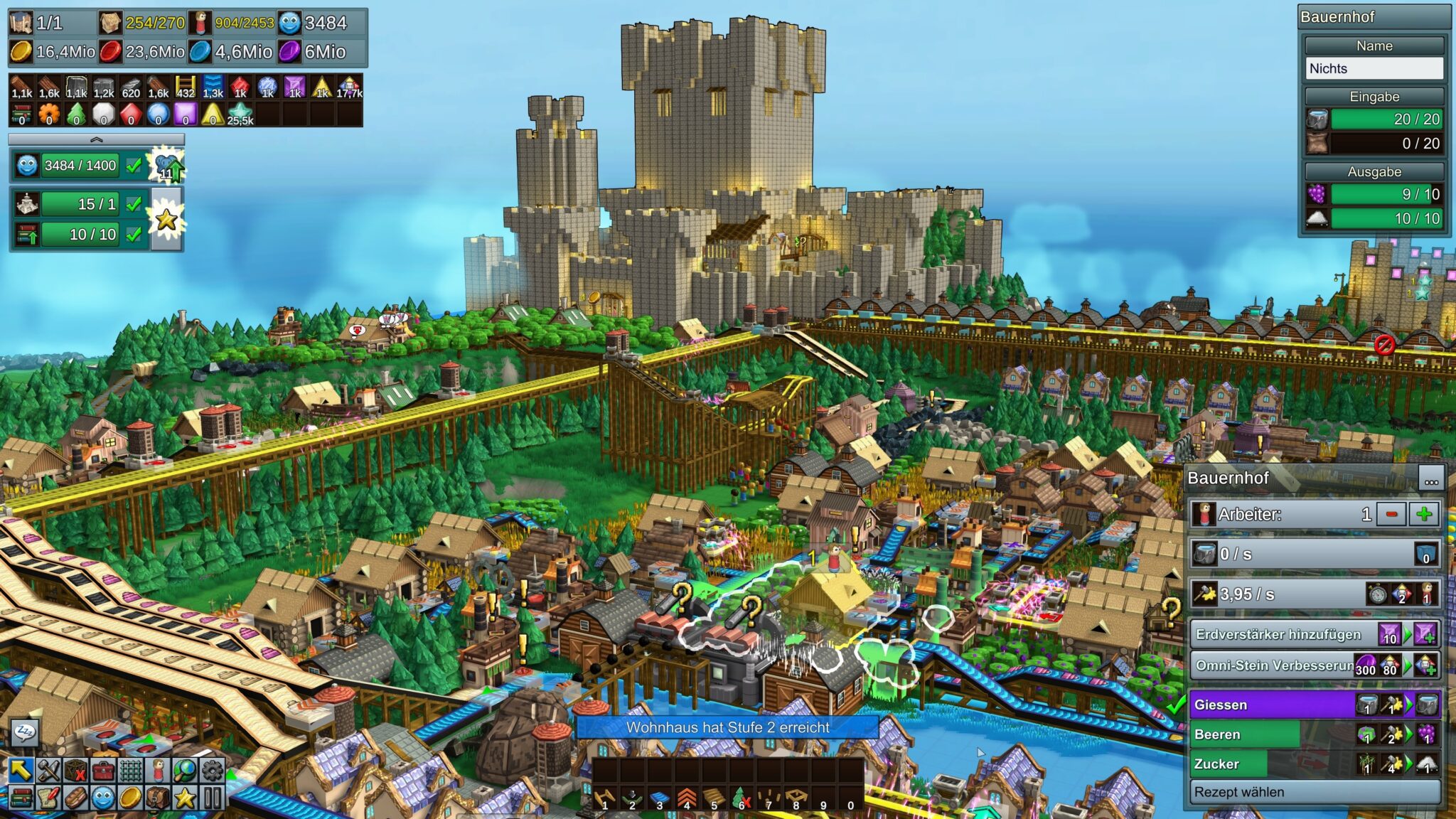 The knot is breaking

But with trial and error and a bit of patience, you’ll get a good handle on the teething troubles and eventually be busy for an easy 40 hours. Important tip: Build as few production facilities as possible in the village itself, even if the distances to the market stall, general shop and end customers are nice and short. But you have hardly any space here for chutes, conveyor belts and tracks. Besides, your village will grow with time and you will need the free plots for more houses.

Praiseworthy: Factory Town has, in addition to a very extensively configurable free game and the sandbox mode, several practice maps with a focus on, for example, railway traffic. The locomotives need water and fuel, there are signals and stations, loaders and unloaders.

When your transport routes and production processes work like clockwork on a real map, the sense of achievement is great. And it’s fun just to watch the goods whizzing around – only to intervene again and improve a detail or replace a complete trolley track with a train line. Because a game in Factory Town is a bit like a model railway: you’re never really finished!

I love building games where the goods don’t just teleport around or just show up as numbers, but are actually transported. With as many different means of transport as possible! That’s why Factory Town is my tinkering tip: Here you can decide for yourself whether you want to have resources hauled around by workers in the classic way, or whether you want to transport them with chutes, conveyor belts, carts, covered wagons, ships, railway trains or airships. The learning curve is a bit steep at the beginning, as building on sloping terrain or in narrow places is very fiddly and the height levels are sometimes difficult to recognise. But with time you get an eye for it, and then Factory Town develops a strong pull. The various slides, conveyor belts and switching points alone are a real treasure trove for tinkerers.

But I can also recommend Factory Town to classic construction players, because basically everything works without automation and efficient logistics, it just takes longer. There’s no storyline, but I don’t think that’s really important in a game like this. However, I would have liked the campaign to be a bit tighter, because I have to explore a lot of things again in each of the eight missions, for example. But I’m rewarded with bigger and bigger maps and more and more possibilities – and in no time at all a few hours are gone!