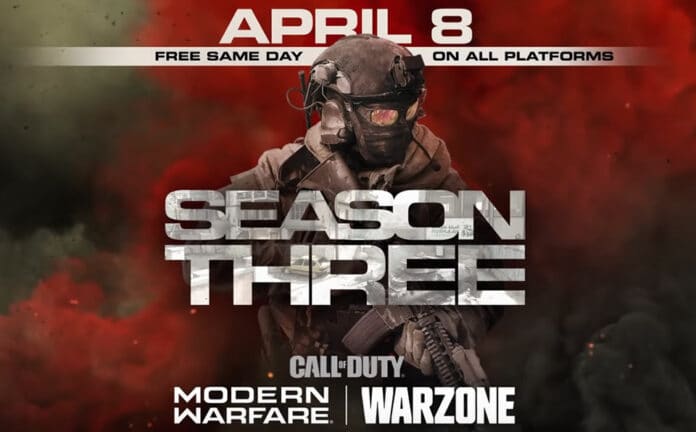 The next season of Call of Duty: Warzone and Cold War will start in April 2021. There is no official information yet, but there are interesting leaks.

Season 2 for Call of Duty: Warzone and Black Ops: Cold War is still running at full speed, but the first unofficial information about Season 3 has already surfaced. The usually well-informed Youtuber TheGamingRevolution (TGR) has already discovered potential content information in the game’s files.

Beware, leaks: so far there are no official announcements about Season 3 of Warzone and Cold War. The information from this article refers to datamining finds. Thus, it is uncertain whether the content will really appear in the form mentioned here.

These are the contents of Season 3

There are rumors regarding four new weapons, two of which are already known. However, these could also make their way into Cold War’s multiplayer mode. Two others are from Black Ops. There is also information about new equipment.

Usually three new weapons are released in a season, so you probably won’t get all of them in Season 3. According to TGR, they could also be leftovers that are still in the game files, but have been deleted in the meantime:

Cold War
Already since the game’s release, there have been hints in the files about the map Echelon, which is supposed to be like a mix of High Rise and Dome from Modern Warfare. It is possible that this map will be released with Season 3. Further, according to TGR, hints can be found about a desert map called Dunes, which is designed for Fireteam and multi-teams.

Warzone
And then there are the persistent rumors about a new map for Warzone, which could also appear with Season 3 and is supposed to be composed of smaller Cold War maps. It is said to be set in the Russian Ural Mountains and will be larger than Verdansk. You can read all about it in a separate article:

All Informations and Leaks about the new Map

According to TGR, the zombie mode from Cold War will be expanded over the course of the year. New content could also be coming for Outbreak. There are hints in the game files of:

According to CharlieIntel, developers at Treyarch are said to have confirmed that Outbreak could be integrated into upcoming CoDs if the mode is successful enough.

What’s next for Warzone?

According to consistent leaks from known sources like Tom Henderson and ModernWarzone, a nuclear explosion will wipe out the zombies from Verdansk. And the entire map as well, if you believe Henderson’s prediction.

However, this event could extend over a longer period of time. And according to TGR, the undead are spreading even further for now: Players have spotted a ship off Rebirth Island that may also have zombies on board – the same way the brain-eaters landed in Verdansk. In Season 3, the smaller of the two warzone maps could also be overrun.

When will Season 3 be released?

As soon as more information about the upcoming season of Warzone and Cold War is released, we will of course keep you up to date.