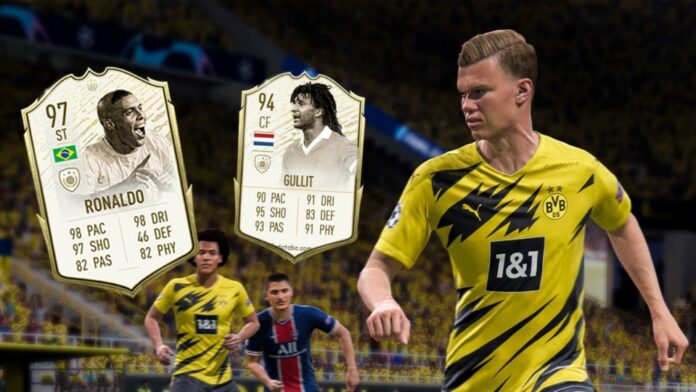 The FIFA series is facing a huge scandal: EA employees are said to have secretly sold valuable FUT cards to players and thus enriched themselves.

The Ultimate Team mode of FIFA 21 is known to many for the fact that fans can invest real money to open lootboxes with virtual soccer player cards – we talked about this topic in detail in the GameStar podcast. But the term “Pay2Win” has taken on a whole new meaning due to current rumors.

Possibly the biggest scandal in FUT history is brewing on Twitter: EA employees have allegedly been caught selling rare cards directly to players under the table – and for a lot of money.

On the evening of March 10, 2021, screenshots and other alleged evidence began making the rounds on Twitter under the hashtag #EAGate.

The shared images and videos allegedly show conversations between players and EA employees about the prices for secretly selling valuable players:

The players sold are said to be some of the rarest and strongest player cards in the entire game: A Ronaldo Nazario in the Prime Icon Moments variant, for example, is said to cost $2,500, while a Ruud Gullit hits at $1,000. Other pictures show other prices – so there could be more than one employee involved.

The offered players are so rare that hardly any player owns them. Even on the in-game transfer market, they are not even offered for the maximum possible price. Those who want to call these icons their own usually have to invest significantly more money in Lootbox purchases. So for those hardcore gamers and e-sports enthusiasts, buying them outright would actually be a good deal.

Further material allegedly shows that such transactions actually took place. The whole thing is made more credible by the fact that the players here are marked as “non-exchangeable”. Lootboxes with non-exchangeable players are only limited accessible, so there can’t be a frequent buyer of FIFA Points behind it. Of course provided that the pictures and videos are really real:

Video proof?!? I mean this could just be an EA Dev though or an actual employee? Who knows anymore. It’s all allegations, let’s just hope EA makes a statement on this and stays honest with us. #FUT21 #FIFA21 pic.twitter.com/lzqGMDE5S3

This is how the community reacts

YouTuber Nepenthez, on the other hand, sees the problem with EA itself. As a cause that such deals are possible at all, he calls the artificial shortage of these sought-after players:

If you spend money on FIFA points, it’s almost impossible to afford these players unless you invest more than 1500 euros (most likely far more).”

EA Sports released an official statement on social media following the reactions from fans and streamers. This suggests that the evidence is legitimate enough to be taken seriously by the developers. According to their own statement, they have already launched an investigation:

“We are aware of the allegations that are currently being spread in our community related to FIFA 21 Ultimate Team Items. A thorough investigation is underway and if we find any inappropriate behavior, we will act quickly. We want to make it clear to you – this type of behavior is unacceptable and we do not condone in any way what is alleged to have happened here.”