A teleport every 20 seconds – Is Tahm Kench about to be broken? 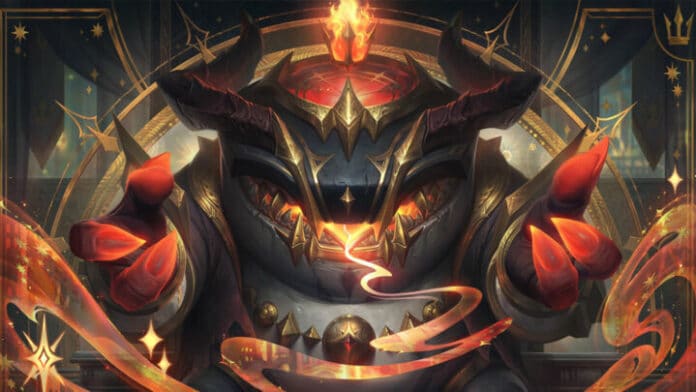 The River King in League of Legends is due for a rework that swaps his Ultimate for the W ability. What this could change about his play style or even position, we reveal here.

Support champion Tahm Kench is about to get a comprehensive update in League of Legends. In it, the River King’s abilities will be individually adjusted and rotated, which should make him more playable outside of professional LoL leagues. The update has been announced by Riot Games since the middle of last year, but is only now in testing on PBE servers, according to Surrenderat20 mod “Spideraxe”.

Froggers Tahm Kench rework is on PBE, here are his tooltips pic.twitter.com/oH94De4cuQ

The biggest change, and one that was announced last year, relates to the Frog King’s W and R abilities. The former ultimate ability “Abyssal Voyage” – a teleport that roughly reaches from one lane to the neighbouring one – can be found after the update as “Abyssal Dive” on the W button. It also has the cooldown of a W ability with about 20 seconds and costs only half of the former mana with 50 points at level 1. This change alone raises the question: Won’t the rework make the frog far too strong?

Another new feature of “Abyssal Dive” is a knock-up effect that Tahm inflicts on opponents when he emerges on the other side – meaning additional attack potential for the River King. To protect his ADC as a supporter in the lane, the former W ability “Devour” was always Tahm’s central tool. After the rework, however, it becomes his ultimate ability and thus has a significantly longer cool-down. In general, less support and more engage. So will Tahm Kench become a purely offensive champion?

Consequences for the Frog

The swapping of W and R abilities as well as their cooldowns and mana costs will have an influence on Tahm Kench’s play style that should not be underestimated. Until now, Devour as a W ability for the River King was a central means of defending against attacks on the ADC. The ability was virtually considered the tool, making him an effective supporter in the lane. However, now that Devour is an Ultimate and has a high cooldown, Tahm will be able to use this move significantly less and may lose efficiency as a Supporter.

Well maybe I shouldn't say "is a great support" since he hasn't been great for a while but even now his W is amazing peel utility which is gone in favor of an engage ability.

At the same time, the ability “Abyssal Dive”, which used to be classified as an Ultimate, is back with a significantly lower cooldown and an additional knock-up effect. So while it was previously used in a support manner as a quick means of transport together with the ADC, after the rework it would make more sense to dive into a group of enemies and start an Engage with the Knock-Up. Since Tahm can already do this at level 1 every 20 seconds, he thus transforms more into an Engage supporter – if he will still make much sense in the role at all.

Ye nah. Tahm jg is dead. Tried to clear and it like way to slow to be viable. But hell be good top/supp imo

Several of the reactions from SoloQ players under Spideraxe’s tweet no longer see Tahm Kench as an efficient supporter after the rework – so there is not necessarily any question of “too strong” with Tahm. Instead, in their opinion, he could play the entire map due to the new W ability and thus be tried out as a top laner or even jungler.

How the upcoming update will change the meta around the Frog King, however, will only become clear after its release. Without a concrete date, the current test phase on PBE servers only suggests that this could be the case in one of the next patches.

Kena: Bridge of Spirits: 8 tips we wish we’d known before

Kena: Bridge of Spirits: 8 tips we wish we’d known before