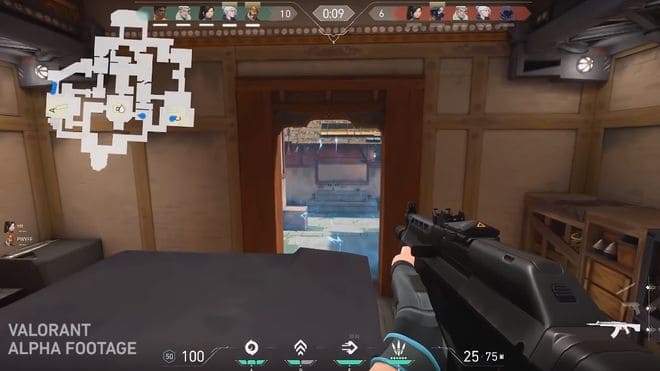 The shooter known as “Project A” now has a name: Valorant. The game, developed by Riot Games, is scheduled to be released for PC in the summer of 2020.

Last year, Riot Games celebrated the tenth anniversary of League of Legends with a sumptuous party and numerous announcements. Among other things, the mobile version of LoL was shown, as well as a fighting and shooting game.

The latter has now been officially named and is henceforth known as Valorant. The first gameplay was recently published.

The best of Counter-Strike and Overwatch
At first glance, Valorant looks like a mixture of two of today’s most famous shooters: Counter-Strike: Global Offensive and Blizzard’s Overwatch. Riot also makes use of the aforementioned genre representatives in terms of gameplay.

At the beginning of the round, players buy individual weapons and complement them with a previously (presumably) selected skill set or a hero/champion. Similar to Overwatch, each character is supposed to have different skills, but unlike Blizzard’s team shooters, they are given less weight, and instead focus on gunplay.

The game principle follows the customs of well-known games: 5 vs. 5 and bomb disposal. Nothing is known about other game modes at this time.

Old and new united
Furthermore, Riot Games attaches great importance to the playability for supposedly every hardware class. Thus the developer studio writes on the official homepage of the game that both current high-end devices and computers with hardware from ten years ago may enjoy Valorant.

For older computers, a stable frame rate of 30 FPS should be guaranteed, for modern devices up to 144 FPS.

According to Riot Games, the release of the game is already planned for this summer. However, the developers of League of Legends did not name an exact date.