Valorant: All information about the characters and skills

Eight of the playable characters in VALORANT have been introduced so far. According to Riot Games, twelve are planned for release. We will introduce you to the characters known so far.

As more characters are introduced, we will keep you informed and update the article.

If you don’t use them in the round, you can take them with you to the next one. The fourth ability is the Ultimate, which is a very powerful ability that must be recharged with kills before you can use it.

Once again, you’ll find a mixture of the well-known Esport titles Counter-Strike: Global Offensive and Overwatch.

Below are the known agents and their abilities:

Brimstone
Brimstone comes from America and his skills are all about air support. He can request smoke grenades, a stim pack for allies, and as the Ultimate, he can execute a devastating orbital strike. His package is rounded off with a fire grenade.

– Incendiary – Brimstone throws a fire grenade that leaves a surface of fire.
– Stim Beacon – Brimstone requests a Stim Beacon at the targeted location. This gives nearby players increased firing speed.
– Signature Ability: Sky Smoke – With a marker on the map, Brimstone can place smoke grenades.
– Ultimate: Orbital Strike – As an Ultimate, Brimstone can request an orbital bombardment at any location on the map. This causes high damage over several seconds. 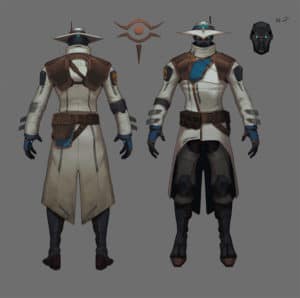 Cypher is the best choice of agent if you like collecting information. The Moroccan’s skills focus on traps and all kinds of gadgets.

– Free Ability: Trapwire – Cypher places a hidden tripwire between two walls. When triggered by enemies, they are uncovered and tied in place for a short time.
– Cyber Cage – This remote-controlled trap slows enemies as they enter the area.
– Signature Ability: Spycam – Cypher places a camera to keep an area under surveillance. The camera can also fire darts that reveal the enemy’s position.
– Ultimate: Neural Theft- With his Ultimate, Cypher steals information from a fallen foe and reveals the positions of his allies. 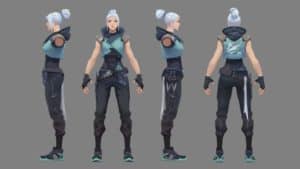 The next agent is Jett from Korea. Her specialty is her impressive mobility. This allows her to move rapidly over the maps and overpower her opponents.

– Cloudburst – Jett hurls a cloud of fog that blocks lines of sight.
– Updraft – After a short recharge, Jett catapults herself into the air.
– Signature Ability: Tailwind – Jett teleports over a short distance in line of sight.
– Ultimate: Blade Storm – Jett reaches for her throwing knives. These do moderate damage, but eliminate enemies directly in headshots. As soon as you kill, you will receive the full number of knives again.

The background of this agent is still unknown. His toolkit is primarily designed to deceive and disorientate his opponents.

– Paranoia – Omen sends a shadow in a straight line. Anyone who touches it will be blinded.
– Shadow Walk – After a short recharge, Omen can teleport over short distances.
– Signature Ability: Dark Cover – Omen sends out a bullet that explodes at the end and obscures the view in a radius.
– Ultimate: From the Shadows – Select a location on the map to teleport Omen there. At the arrival point it will appear as a shadow, returning to its starting position if it dies. 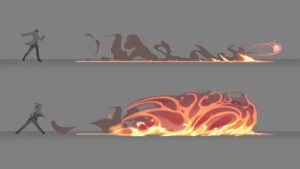 In the case of Agent Phoenix, the name is directly program. The Brit can throw fireballs around, build fiery walls and even heal and possibly revive himself.

– Hot Hands – Phoenix throws a fireball that explodes after a short delay or on contact. The explosion deals damage to enemies and heals Phoenix.
– Blaze – Phoenix creates a wall of flame that not only blocks your view, but also deals damage to anyone who passes through it.
– Signature Ability: Curveball – Phoenix hurls flame balls that explode after a short time and blind all players. The ball can be thrown with both left and right spin.
– Ultimate Ability: Run it Back – Phoenix marks his current position. If he dies during the duration of the ability, or the ability expires, he will be resurrected at the previously marked position with full HP.

Sage has a clearly supporting role, similar to Mercy in Overwatch. From a background in Chinese she has a strong arsenal of healing with her. As Ultimate, she can even resurrect allies.

– Slow Orb – Sage ejects an Orb that explodes on contact, creating a slowing field. Enemies in the field move more slowly, cannot jump, and cause noise when running.
– Barrier Orb – Sage creates a freely placeable barrier.
– Signature Ability: Healing Orb – Sage heals an ally or himself to full HP.
– Ultimate: Resurrection- After a short delay the targeted ally is resurrected. 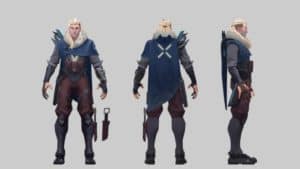 Sova differs from the other agents in that he brings his archery skills to the table. Depending on the arrow, the Russian can uncover enemy positions or do damage. Additionally he brings a drone to make life difficult for the opponents.

– Shock Bolt – Sova shoots an explosive arrow that sends out a wave of damage on impact.
– Owl Drone – The drone is freely controllable and can fire another dart, which reveals hit enemies.
– Signature Ability: Recon Bolt – Sova fires an arrow with sonar. Enemies in the vicinity are revealed.
– Ultimate: Hunter’s Fury: Sova fires up to three energy arrows that traverse the entire map. Players hit suffer high damage and are marked. 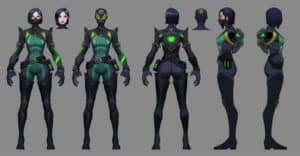 The second American character is called Viper and she is all about poisons and chemical warfare agents. With poison clouds and all kinds of other chemicals she makes life difficult for her opponents.

– Snakebite – Viper fires a projectile that leaves a puddle of acid that damages enemies.
– Poison Cloud – Viper places emitters to produce a poison cloud as needed. This consumes fuel.
– Signature Ability: Toxic Screen – Viper lays out a long line of emitters and can build a poison wall against fuel.
– Ultimate: Viper’s Pit – Viper creates a massive cloud of poison over a wide area. This cloud remains as long as Viper is inside it. Enemies in the cloud are revealed to Viper.

Do you have a favorite agent yet? Tell us via social media!