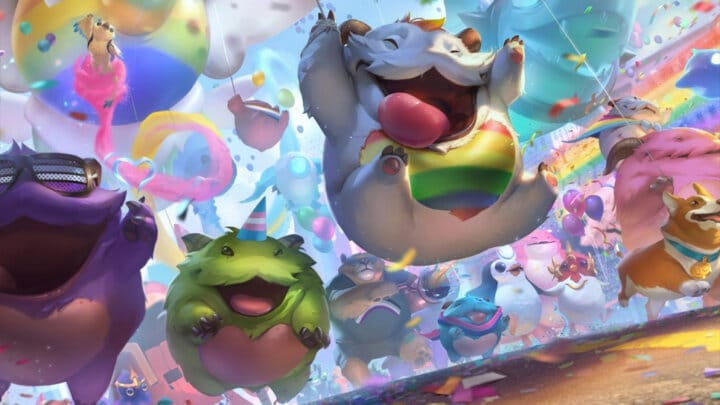 Rainbow tracks in League of Legends or a new paint job in Forza? This is how you can celebrate Pride Month in video games

Bright colours and equal rights for all: June is a time to celebrate the LGBTQIA+ scene and fight for equal rights. In doing so, a sign is set for sexual equality and tolerance in society.

Pride Month originally served to commemorate the Stonewall Uprising. But now more and more companies and video game developers are using the time to show their support for the community in their games as well.

So if you want to celebrate Pride Month in the virtual world as well, you can look forward to some rainbow-coloured sets and offerings. Here are a few suggestions of which games are delivering Pride content.

The world of Runeterra celebrates Pride

Riot Games offers special content for several products. For example, League of Legends has rainbow poro icons that can be used to activate Homeguard lanes in the colours of the various LGBTQIA+ flags. These are available until the end of June.

Corresponding emotes and icons are also available in the other Riot titles Legends of Runeterra as well as Wild Rift. Teamfight Tactics players can also equip the icons, leaving a colourful trail for the champions to follow. For more information on how to unlock the icons, simply head over to the official Riot Games homepage.

Tell Me Why available for free on Xbox

Those who prefer to gamble on the console can celebrate Pride Month with Xbox. Not only does the company offer special merchandise or an exclusive Pride controller, but also massive amounts of content for games.

The adventure game Tell Me Why, released in 2020, is free to play throughout the month. The title not only made headlines for good storytelling and gameplay. Tell Me Why is the first game by a major developer studio in which a transgender character could be played.

Motorsport fans can pimp their cars with a rainbow livery in Forza Horizon 4 and Forza Motorsport 7. In addition, there is now the option to customise your profile with a special Unity name tag in Halo: The Master Chief Collection.

There are currently no offers for the PlayStation. However, Sony has also participated in Pride Month in previous years. Should the colourful parade also find its way onto PlayStation consoles, you will of course hear about it here.