Cyberpunk 2077: Stolen alpha videos cause a scandal that isn’t one 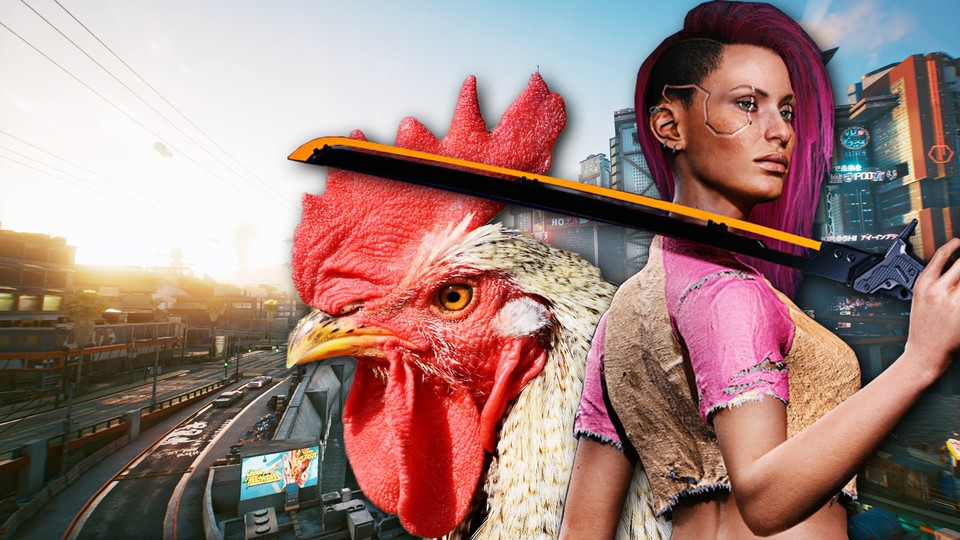 Several alpha videos for Cyberpunk 2077 have been leaked – with heaps of bugs. Elena explains why this has absolutely nothing to do with the bumpy release

To the groovy trailer music of Cyberpunk 2077, cars whirl through the air, people ride on hotdogs or chickens and models dance in T-pose to Michael Jackson’s Thriller. Short clips showing the early days of the open-world game and probably the humour of one or the other QA employee.

These leaked alpha videos are currently causing outrage, as for some they seem to prove the disastrous state of the game well before launch. After all, there are heaps of bugs to be seen – ergo, the developers and management must have known about them for a long time and fooled us.

The frustration of the players is absolutely understandable. Those who still can’t play or are even waiting for the role-playing game to finally be available again on the Playstation Store certainly don’t have the longest fuse when it comes to jokes about bugs.

I completely understand that the videos are the straw that broke the camel’s back for many and that the fans’ anger is now being vented. But it doesn’t do anyone any good to try to pull the wool over CD Projekt Red’s eyes. Because the fact is: such videos are not unusual at all and have nothing to do with the release status of Cyberpunk or the attitude of the developers.

Let’s break it down: During a hack attack on CD Projekt in February, data was stolen and even back then, some gamers were already saying that this was just the right punishment – an attitude that editor-in-chief Heiko Klinge could absolutely not understand.

The stolen goods were auctioned off online and were supposed to remain under lock and key. The buyers, however, apparently did not abide by the terms of the auction and now put the first contents of the internal videos online for all to see. Currently, they can even be accessed and it cannot be ruled out that even more sensitive stolen content and data will be found somewhere.

Such humorous bug videos are nothing special per se. There was also one for God of War, for example, and CD Projekt has also voluntarily published such a video – namely as a self-deprecating wink at The Witcher 3, which also did not run smoothly at launch:

With Cyberpunk 2077, however, the problems are more serious for some and the affected players will certainly not feel like laughing for much longer. We don’t know if and how such a video was planned for the future. The loosely edited clips on Reddit were certainly not intended for the public.

Many journalists and players quickly sensed a scandal behind it and the accusations overflowed: Some saw the videos as proof that the problems were foreseeable at the time of release and that the studio bosses had lied about them. Others were annoyed by the seemingly gloating developers who were making fun of the players’ disappointment.

In reality, it was only an internal QA video, as developer Slava Lukyanenka confirmed in a tweet that has since been deleted. However, this did not appease all the angry fans.

Even the established industry insider Jason Schreier initially declared the video to be proof that the management must have known about the state of the game – although according to the official apology many problems only occurred after the launch. Later he deleted the tweet again, stating that the video did not prove this, but that he was nevertheless sure of it:

I deleted an earlier tweet about the Cyberpunk bug reel because a dev joke video isn't great evidence that CDPR management was full of it when implying they weren't aware of the game's issues.

Of course, CDPR management was well aware of the issues. That video just isn't proof!

It remains to be seen whether Schreier is right. It could very well be that the management knew about it, but it could also be that some bugs only appeared after the release – a phenomenon that we experienced ourselves during our test. What bothers me about the situation is how quickly and uniformly many sites, journalists and gamers jump on the bandwagon and accuse the developers of cheating.

Why the accusations are hurting us all

The videos are clearly from an early stage of development. Which and how many bugs appeared at that time says nothing about the launch state many years later. The cyberpunk from these videos is in such a raw state that it has almost nothing to do with the current game and its problems.

Particularly since you can see some discarded or never really planned elements such as the third-person perspective or replaced models (chickens as cars) that were deliberately inserted and are thus not unfortunate game bugs.

Equally, it cannot be inferred that the development team does not take bug-fixing seriously or that they are mocking the players. Regardless of the entertainment value of such videos, documenting bugs makes perfect sense and helps with further work on the game.

Please don’t get me wrong. I don’t want to talk up Cyberpunk 2077, nor do I want to defend CD Projekt. We should all learn from the launch, as colleague Peter has already stated, and address and criticise the real problems – that’s the only way to change things.

But chalking up every little thing to the developer and blowing up every tiny piece of news into a scandal achieves exactly the opposite. It only dilutes the discussion about the really important issues like working conditions in the industry, crunch or expectations of big hype games like Cyberpunk and doesn’t get anyone anywhere.