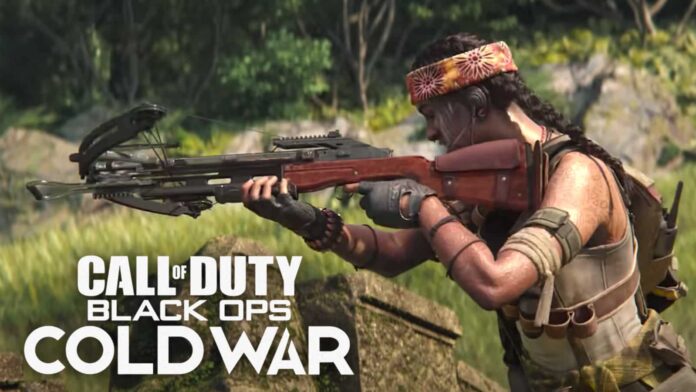 For a short time, players of Call of Duty: Warzone and Cold War could unlock a new weapon ahead of time. The developer is quick to respond.

On March 18, players of Call of Duty Black Ops: Cold War were happy about a new weapon: the R1 Shadowhunter crossbow. In the meantime, however, it has disappeared from the game again. In fact, you weren’t supposed to get access to this special opinion booster yet.

What’s behind the crossbow

For a short time, you could buy the R1 Shadowhunter in the Call of Duty: Warzone and Black Ops: Cold War store for 1,200 COD points. However, you were only allowed to use it in multiplayer, not in Battle Royale. Some players also took advantage of the erroneously available offer directly.

In addition, a challenge was unlocked that allowed you to get the crossbow for free. To do so, you had to earn three “One Shot, One Kill” medals with a weapon without attachments over 15 matches. Accordingly, players quickly set out to do just that, leveling up the weapon afterwards.

Accordingly, videos started appearing on Youtube directly, not only explaining how to get the crossbow, but also showing it directly in action:

This is how the developer reacts

Crossbow disappeared from the store: It didn’t take long, and Activision removed the R1 Shadowhunter from the game again. Currently, you can’t find it in the store, nor can you complete the challenge.

Will I get my money back now? Buyers should be compensated and get their money back. The CoD points should end up back in your account.

An issue with the R1 Shadowhunter weapon appearing earlier than planned in Warzone and Black Ops Cold War has been resolved.
Refunds are planned for players who purchased the bundle while it was live in the Store, and the bundle and in-game challenge will return at a later date.

What happens to my progress? While initially it was also planned to completely reset the progress for the challenge, the studio rowed back here after heavy criticism. All players who had already unlocked the weapon will directly receive a progress of 14 / 15 on the associated challenge with its official release. A direct unlock, however, would not be possible due to technical limitations. All others keep their previously achieved progress.

When will the crossbow be back? When the R1 Shadowhunter crossbow will officially appear in both games is currently unknown.

What will happen in Season 3?

What Call of Duty: Warzone and Black Ops: Cold War are planning to do in Season 3 is currently unknown. However, there are already some leaks that could shed light on this – and besides nukes and zombies, there are other exciting rumors:

We should find out by April 21 at the latest. Because that’s when the current Battle Pass ends, and as usual, the next season will probably start right away. The new content should be released shortly thereafter.