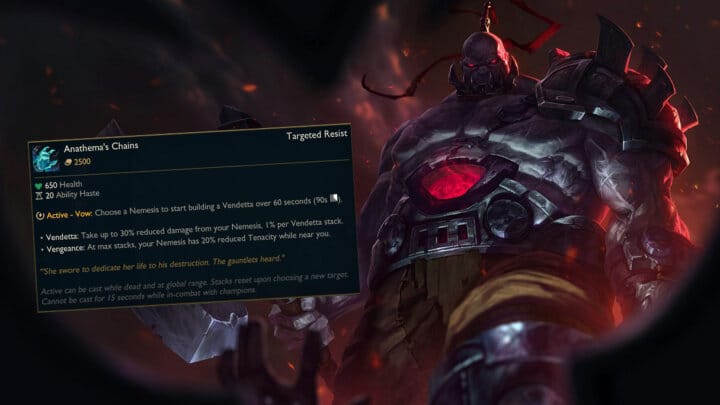 The new LoL patch 11.13 brings a new tank item to the Summoner’s Rift, with which you can weaken a selected opponent.

Riot Games has announced a new item called “Anathema Chains”. Already a few weeks ago, the item was introduced by Lead Games Designer Jeevun Sidhu on Twitter – Now this new legendary item is playable on the League of Legends Test Server (PBE).

Item values have barely been changed since development. Anathemas Chains gives 650 health and 20 cooldown reduction immediately upon purchase. The item also has an active ability that works like an oath, allowing the player to choose an enemy player (nemesis).

Based on this, the user can build a Vendetta. With the help of Vendetta, up to 30 percent damage can be kept away from the chosen Nemesis (i.e. the chosen opponent), with one percent reduction added per Vendetta stack.

“Vengeance” is another feature of the item that can reduce the crowd control ability of the nemesis by up to 20 percent when it is nearby. Unfortunately, the archrival cannot be changed afterwards within a team fight. Changes outside of the duel will result in the loss of all Vendetta values collected up to that point.

We know it's powerful at stuffing a fed carry. That's definitely the idea! It's not intended to be restricted to a sidelaning context.

Despite this disadvantage, lane players in particular have the opportunity to gain a small advantage over their direct opponent. The nemesis can be changed outside of team fights to make the buff dependent on another opponent during the course of the game. The legendary item currently costs 2500 gold and can be built from Kindlegem and Giants Belt.

The release of the new item is scheduled for the release of Patch 11.13. In addition to new items, this patch also brings massive changes for mythical AP items. Also included are revisions of the champions Tahm Kench and Lucian.

Whether the item will come into the game with exactly these or changed values will become clear after the time on the test server.

As good as the PC version? – A Plague Tale: Innocence 4K Update

FIFA 22 – Gomez unveiled as one of the first FUT Heroes

Steam charts fall back into old patterns after Summer Sale

As good as the PC version? – A Plague Tale: Innocence...

Steam charts fall back into old patterns after Summer Sale