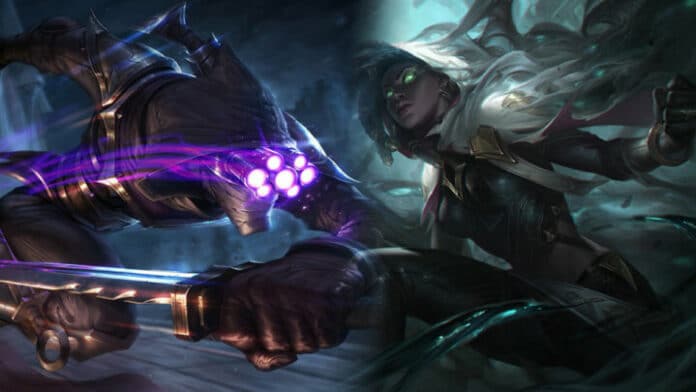 The official patch notes 11.11 in League of Legends are live. Champions like Master Yi and Senna are to be less tied to a specific item, while some champions in the Jungle will receive a nerf

Patch 11.11 in League of Legends is live and brings nerfs to eight champions, while nine others receive a buff. Tank items are also in focus, alongside further tweaks to Senna and Master Yi. Developer Riot Games announced the changes on Tuesday night.

The junglers in particular get their due in patch 11.11. To prevent too fast camp clears, the damage of champions like Morgana and Rumble has been reduced to monsters. Lee Sinn has to wait a little longer for his E skill.

Elise: Damage scaling of hit damage in spider form reduced from 30 to 20 percent.

Morgana (Jungle): Damage on W against non-epic monsters reduced from 185 to 155 percent

Rumble: Upper limit for hit damage of the passive against monsters reduced from 120 to 80

Leona: Base damage of W reduced by 15 points per level

Master Yi: Damage scaling of Q reduced to 90 percent; base damage on E reduced by 10 points each

Qiyana: Additional run speed of W reduced by 2 percent each

Urgot: Modified damage scaling of W reduced by up to 2 percent at higher ranks.

Buffs for Senna, Ezrael and Ryze

While the recently battered champ Ryze is happy about more health, Azir can use the Q ability more efficiently and cost-effectively.

Ryze: Basic value for life increase increased from 98 to 110

Graves: Basic value for attack damage increase increased from 3 to 4

Seraphine: Base W for shield and for ally shield is increased per level.

Teemo: Cooldown of W reduced from 17 to 14 seconds

Senna: Additional attack range of passive reduced from 25 to 20;

Damage scaling of R increased by 20 per cent.

Senna will find new opportunities as the Frostfire Gauntlet has been toned down accordingly. The same goes for Master Yi, whose attack stats will be changed to not always automatically choose Duskblade of Draktharr.

“We don’t want a champion to feel tied to a specific item or encourage a playstyle that feels out of character,” Riot Games writes of patch 11.11, adding, “So these changes are meant to provide more mythic options for them while emphasising their identities and playstyles.”

Furthermore, the Bramble Vest gets a nerf because it is used very often. Reflected damage no longer scales with additional armour.

This action highlights the problem of using Bramble Vest and Bramble Armour as all-purpose items, rather than as intended for fights against enemies with high healing abilities.

The new PROJECT skins will be available from 27 May 2021. Champions affected are Sejuani, Mordekaiser, Renekton, Senna, Sylas (also in the Prestige Edition) and Varus.

Patch 11.11 in League of Legends is about to be released. The official patch notes are expected on Wednesday evening. A lot of information is already known on the PBE servers.

Nautilus will be another champion to consider as an option for the Jungle with the update. His E skill is said to deal 200 percent increased damage against monsters in the future.

Nautilus is the next #LoL champ that will be shifted into the jungle: at the moment, the Titan of the Depth's "Riptide" ability deals 200% damage to jungle monsters on the PBE.

This mega buff is "just a proof of concept," Riot says. pic.twitter.com/n1Xgnp64Zq

The Titan of the Deep is normally known for his Crowd Control, but with the change, he could move from classic Supporter to the currently most important position between lanes. Because Nautilus’ E ability deals area damage, the champ could soon prove to be an efficient camp killer due to double monster damage .

Unlike Nautilus, Senna is dealt a hard hand. Because her tanking possibilities with the help of the mythic item Frostfire Gauntlet are too strong from the developers’ point of view, it will be generated. Senna is to be used more for Lethality and Ability Power as support in the future.

The currently least used Legendary Item Wardstone will become more playable. With the automatic upgrade from level 13 from Watchful Wardstone to Vigilant Wardstone, more dynamics will come into play. Thanks to the passive, it is possible to hold up to three Control Wards at the same time. Furthermore, the additional passive Blessing of Ixtal provides all buffs to AP, haste and AD as well as health by 12 percent.

In total, there are three systems nerfs and eleven item buffs on the list. Apart from Wardstone, the improvement of the previously generated item Moonstone Renewer stands out. Healing and shield power increases by six percent per buff instead of four percent.

Individual changes may occur until the release of the patch notes.

More details on League of Legends patch 11.11 have been revealed since Tuesday evening. Riot Games Gameplay Design Director Mark “Scruffy” Yetter. As previously announced, the Legendary Item Wardstone will get a small rework.

Patch Preview 11.11 with tentative changes. Nearly done, but there may still be adjustments.

While the original Stirring Wardstone will be removed from the game, the Watchful Wardstone can now be obtained directly. This automatically receives an upgrade from level 13 to the Vigilant Wardstone. This comes with a new ability: Blessing of Ixtal. This increases the Ability Power, Haste, Bonus Attack and Bonus HP by 12 percent each.

Senna, meanwhile, gets more adjustments than other champions. Her base HP will be increased by seven points. In addition, on her Ultimate, the Physical Damage AP Ratio is increased from 50 to 70 percent. There is also a minimal AP boost on their E skill.

Recently popular Jungle champions like Rumble have to lose penetrating power. The passive of the mechanised threat has now been drastically reduced to a maximum damage on monsters of 120 to 80. Thus, quick Camp Clears are prevented. The same applies to Morgana in the Jungler role: her W ability loses damage against monsters from 185 to 155 percent. For Lee Sin, the E ability’s cooldown is increased from 8 to 9 seconds to make the early game a bit more comfortable for the opponent.

Riot Games gameplay design director Mark “Scruffy” Yetter gave the first hints of patch 11.11 in League of Legends on Monday. As many as seven items will receive a buff. In addition, the Hail of Blades and Buiscuit Delivery runes will have to take a nerf.

Still work in progress so there may be a few changes to what you see here. Expect more details tomorrow. pic.twitter.com/rLfof4rcRw

The first item on the list will probably receive the biggest buff. Wardstone is among the least picked items and is listed as “Quality of Life” in the patch preview, which speaks to a more user-friendly new feature. According to Dot Esports, this is a minor rework, which will benefit support players.

Once support champs reach level 13, Watchful Wardstone will be upgraded directly to Vigilant Wardstone. In addition, all buffs for Attack, AP, and Haste that the Legendary Item gives will be increased.

In patch 11.11, the Jungle-specific champion variants of Morgana and Rumble are expected to be toned down. Lee Sin, who received multiple buffs in previous updates, will also have to cut back a bit – literally. Blind Monk has a high pick-and-ban rate during the Mid-Season Invitational as a flex pick on the mid and top lane, and is expected to deal less damage to Minions as a result of the upcoming nerf.

Similarly, Rumble. The mechanical champion has proven itself as a fast camp killer in the Jungle and has been used accordingly often. A slower Camp Clear would be expected. On the other hand, Hecarim is improved again after his massive nerfs before. Other popular champions like Ryze, Ezreal and Seraphine are on the buff list.