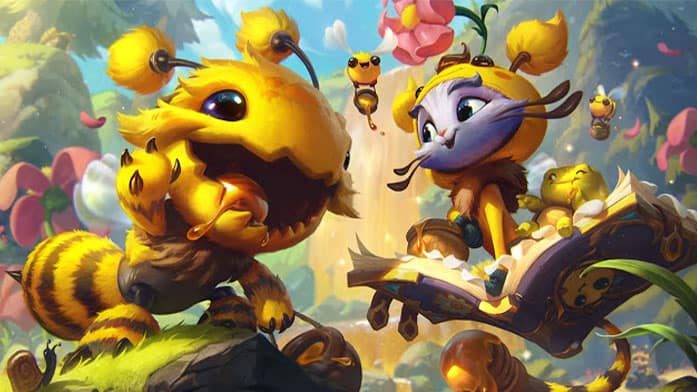 Patch 11.5 has now arrived on the live servers. True to the announcements of gameplay designer Mark Yetter, a large part of the already known changes have been adopted. We summarize the most important aspects of the patch notes for you here.

As announced, the new patch takes a number of champions to task. However, according to Riot Games, a large part of the nerfs will only really be relevant for the pros. Support and Carry champion Seraphine, for example, will receive adjustments to her passive and ultimate abilities, which should make a difference for Platinum to Challenger players in particular. Azir, Gragas and Rell should only play differently in professional leagues, while only Udyr, Rammus and Shaco have changes for casuals as well.

Buffs for Samira and Master Yi

On the buffs side, a full eight champions can look forward to improved stats. The buffs are not categorized by Riot Games as casual or pro-play, so they should be generally relevant. AD-Carry Samira finally finds her way into the buff list, besides her Riot Games also takes care of top lane Carries like Master Yi and Jax.

In the new patch, new skins for Malzahar, Yuumi and Kog’Maw make their way into the game. They strengthen the already started bee skin series, of which only Teemo and Singed were a part so far.

In addition, changes to six items find their way into the game. These have been implemented in the game as announced:

Two days before the release of patch 11.5 in League of Legends, the changes to some champions are becoming clearer. Developer Riot Games is targeting dominant champions, as well as pocket picks, according to PBE changes. In addition, a new skin series is humming through the gap.

In addition to the major changes to Seraphine, Samira and Senna (see original article below), Udyr also comes into focus. The Spirit Walker has been one of the top picks in the Jungle for several weeks, with a win rate of 54.1 percent according to League of Graphs. On the PBE, Riot is now attacking Phoenix Stance, which Udyr uses to deal Magic Damage and work his way through the Jungle quickly. In addition to a damage nerf from the Stance, Riot also lowers Udyr’s HP per level.

The PBE change to Shaco also caused a stir. The dark clown became a popular pocket pick at the support position in Season 11. Here he got on opponents’ nerves especially with his boxes, which provide a lot of poke. Riot now wants to move the champion away from the bot lane back into the jungle without nerfing him overall. As a result, according to PBE, the boxes now do less AOE and single-target damage, but hurt monsters more in return.

The new patch not only changes the gameplay, but also adds new skins to the game. The Bee series gets three new additions with Beezahar, Bee’Maw and Yuubee. Read more about them in our Spotlight article.

The changes on the PBE are not final, but should not change too much due to the upcoming update. Patch 11.5 will reach the European servers in the night from Tuesday to Wednesday. The official patch notes are expected for Tuesday evening. We will keep you up to date in this article.

Mark Yetter, gameplay director for League of Legends, has shared more details about the upcoming patch 11.5. In the tweet from Wednesday morning, the developer reveals the extent of the previously announced buffs and nerfs. We have summarized the most important changes for you.

11.5 Patch preview with the full changes. Not 100% final but we're getting close.

Samira (a bit overnerfed) and Qiyana added to the buff list as well. pic.twitter.com/RJjQsNTW1e

While the Seraphine and Stridebreaker nerfs were confirmed (see origin article below), Yetter gives deeper insight into the Senna nerf. Henceforth, the shooter cannot exceed 100 percent critical hit chance. However, each additional percentage point of crit chance will still be converted into lifesteal. By doing this, Riot weakens Senna’s synergy with Guinsoo’s Rageblade, which converts crit chance into on-hit damage.

Changes are also made to the Rageblade. The conversion of crit to on-hit damage is now also capped at 100 percent crit chance on the part of the item. In addition, on-hit damage is dependent on the wearer’s crit damage modifier.

A new addition to the buff list is Samira. The Desert Rose had taken hard nerfs in the last update. As a result, the shooter’s win rate had dropped dramatically. Now she gets some damage back on her Q and AD per level. The assassin Qiyana is also getting some damage added after not playing a role in the Gap so far this Season.

Mark Yetter emphasized in his tweet that the announced changes are “not 100 percent final, but close.” Patch 11.5 is scheduled to hit the live servers next week on Wednesday morning. We’ll keep you updated on new details about the upcoming update in this article.

Riot Games is making detailed changes for champions in certain positions in the upcoming patch 11.5. LoL gameplay director Mark “Scruffy” Yetter confirmed this on Twitter Tuesday morning. According to the first PBE previews, the developers are particularly focusing on the Stridebreaker and Seraphine. We have summarized the most important changes for you.

There are a number of these where we're targeting nerfs or buffs on a specific position, so some of the changes will be skewed towards that.

According to Yetter, Seraphine’s role as a bot lane carry should be in particular focus, in which she dominates with an immense win rate of 55.7% according to champion.gg. Initial changes on the PBE server show that the developers want to bring her back to her role as a Supporter. Accordingly, the Ultimate will receive a higher cooldown. The passive will no longer deal double damage to champions, but the lane partner will receive bonus damage from now on.

Furthermore, the developer weakens Senna’s interaction with Guinsoo’s Rageblade and nerfs Shaco Support. Rell will also take another hit, according to Yetter.

In addition to some champions, Riot Games is adjusting items for AD fighters, according to Yetter. The Black Cleaver is now cheaper on the PBE. It gives more HP and also Movement Speed instead of bonus damage on repeated attacks. The Maw of Malmortius will also be cheaper. The Serpent’s Fang will now reduce the effectiveness of shields instead of dealing bonus damage.

The first PBE changes to the Stridebreaker, which is currently a very popular item on the top lane, attracted special attention. On the test server, Riot took damage from the item and reduced the slow. In return, the range of the active dash increases by 100 units.

These values are subject to change until the release on the live servers next week. Mark Yetter announced more details about update 11.5 for Wednesday. We will keep you updated in this article.