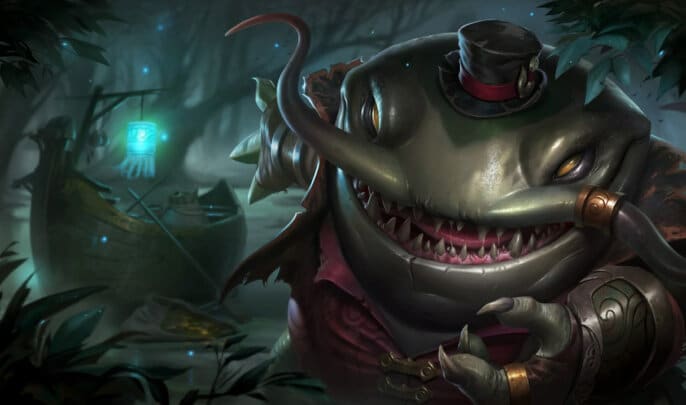 The rework of Tahm Kench is live on the PBE. The official release will follow with patch 11.13. We show off the LoL champion’s abilities

Back in June 2020, gameplay designer Mark Yetter announced that Tahm Kench is facing a “mini-rework.” The focus is on a redistribution of his kit. Tahm Kench, while a viable choice in professional play in the bot lane since 2015, suffers in solo cue. Teams are simply too rarely able to achieve the same level of synergy and coordination with the champion. That could change with the rework.

Riot Games’ developer diary points out the discrepancy between pro-play and solo cue. Mark Yetter mentioned the champion coarseness in the professional scene worldwide. But at Tahm Kench, the win rate was consistently below 50 percent in the rankings. For this reason, the revision of Tahm Kench should be a better choice for casual players. Riot Games toyed with the idea of remixing Tahm Kench’s gear and doing away with his Ultimate. These changes were vaguely outlined a year ago, but were postponed so as not to disrupt the meta.

A year later, we’ve learned that Riot hasn’t forgotten about River King. Earlier this week, the new Tahm Kench has been released on the PBE. Players can now see the specifics behind Tahm Kench’s mini-revamp and try out the champion for themselves before it goes live on servers.

Not much has changed with his passive. An Exquisite Taste still gives three stacks on enemy champions. However, instead of triggering the Devour ability, it simply boosts the new ultimate and the Tongue Whip ability. This shows that despite radical changes have been made to the support, the core of his kit remains the same.

Froggers Tahm Kench rework is on PBE, here are his tooltips pic.twitter.com/oH94De4cuQ

Q (Tongue Whip) remains the same. Along with dealing damage, the effect of this ability provides a 40 percent slowdown to the opponent. As mentioned earlier, Tongue Whip is boosted with three stacks from the Exquisite Taste Passive and can be used to devour enemies from afar.

W (Journey into the Abyss) is probably the most significant change to Tahm Kench’s kit from this rework. The approach for this ability is to retain the core element of the original ultimate ability while giving it an updated attack ability. The new ability allows Tahm Kench to dive to a specific location and recover, knocking enemies within his range. A devoured ally can also be taken.

E (Thick Skin) has remained virtually untouched. The ability still “heals” Tahm Kench with a percentage of the damage taken. This still allows Tahm to act as a tank, which is what he is known for.

Devouring an ally not only protects him from instant damage, but also provides a shield. In any case, Tahm Kench is slowed, but can still use Journey into the Abyss.