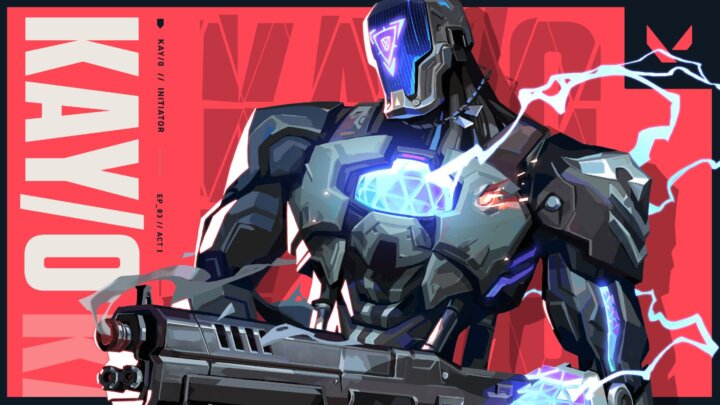 Riot Games reveals all the abilities of the new agent KAY/0. The “war machine” neutralises Radiants and is revivable.

Riot Games revealed details of the new agent KAY/0 on Thursday. The robot is a war machine with only one purpose: neutralising Radiants. It can suppress enemy abilities, thereby hindering them and giving itself and its allies an advantage.

KAY/O’s Ulti is a knife that penetrates a surface. Any abilities of nearby enemy agents are thus overridden.

Another element is in his abilities is “null/cmd”. In addition to overriding an opponent’s abilities, KAY/O can also be revived. For the robot’s opponents, this is another unpleasant message.

The abilities at a glance:

The secret about the appearance of the new VALORANT agent has finally been revealed: The addition is a futuristic robot and will be called KAY/0. This was leaked in a Reddit post on 16 June, but has since been deleted.

According to this, the new agent will appear about three months after the release of the last agent, Astra. KAY/0 is also said to be part of the Initiatoreen class alongside Skye, Breach and Sova.

KAY/O is the next agent heading to VALORANT in Episode 3.

KAY/O will be an Initiator | #VALORANT pic.twitter.com/dyGEKZhjVs

Will the 16th agent in VALORANT be a robot? This is the most hotly debated topic in VALORANT after Riot Games released a hint via video sequence on Twitter on Thursday. This video shows parts of a humanoid robot, whose torso and head part are still separated. Many fans are speculating that this was the first look at Agent 16.

This release in conjunction with Killjoy’s Twitter account takeover of VALORANT could provide a link between the two characters. It could well be that the tinkerer built the robot herself. The voice lines in previous images could be a clue to the new agent’s abilities. For example, it was tweeted, “Variable removed, Alarmbot down.”

Many fans have speculated that Riot Games will be bringing an agent into the game that can disable the abilities of enemies. It is possible that this can be done through an instrument. For example, teaser images of the new map Breeze feature purple glowing daggers that hint at this.

Episode Three in VALORANT is scheduled for release on 22 June. The release of KAY/0 is also expected with the new episode.