A clone of Zelda: BOTW or actually a masterpiece? Genshin Impact celebrates its first anniversary and looks back on a successful year.

The action RPG Genshin Impact by Chinese developer miHoYo is celebrating its first anniversary. Released on 28 September 2020, the game is now available for PC, PlayStation 4 and 5, Android, and iOS. In the past 365 days, the free-to-play title went from being heavily criticised at the beginning to being one of the most popular games of the past months. The most important figures at a glance.

From boos to mega success

The success of Genshin Impact was not certain at the beginning. When the game was unveiled at ChinaJoy 2019, some of the audience:ins clearly complained. The reason for the criticism was the enormous similarity to Zelda: Breath of the Wild. For example, some aspects are very similar to the Nintendo hit, from general movement mechanics to abilities, enemy behaviour or the design of the landscape.

But what already worked for Link’s journey through Hyrule also works well for the search for the protagonist’s twin in Teyvat. That is what the action RPG is about. The players control one of the twins, as well as three other characters who master different elements and incorporate them into their fighting style.

New characters as well as weapons or other resources can also be unlocked through gacha mechanics, i.e. real currency. This is how the free-to-play title makes gigantic sales. According to estimates by Sensor Tower, sales for Android and iOS alone added up to over 10 million US dollars each on the respective release days of a new character. 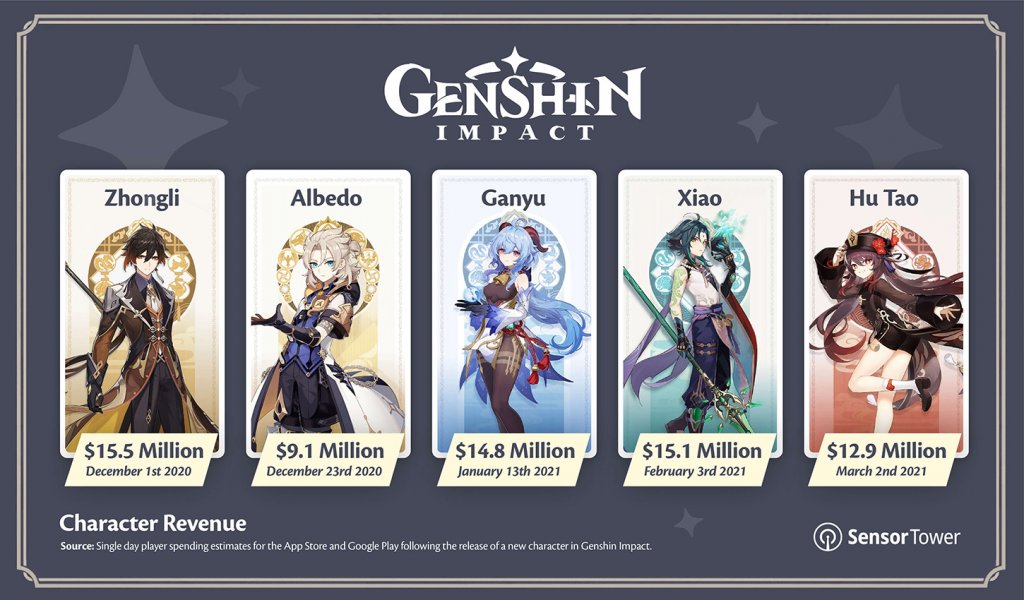 Sensor Tower further estimated that just six months after the game’s release, sales totalled over one billion US dollars. By comparison, popular mobile title PUBG took over 16 months to crack the billion-dollar mark. The majority of Genshin Impact’s revenue appears to have come from Chinese users, with Japan and the US accounting for the largest shares. Sensor Tower’s estimates also include iOS and Android data only. Revenues from PC and PlayStation users are therefore not included.

Monthly users estimated at over 50 million

Player numbers also seem to have gone through the roof. While there is no official data from the developer, the fact alone that over two million user:ins have submitted a review in the Google Play Store alone speaks for itself. There are also hordes of fans on the social media channels, and the YouTube videos on new characters or new story sections attract several million clicks.

Genshin Impact already had over 21 million pre-registered users before its release. The site Activeplayer.io estimates the number of monthly users at over 50 million. On the occasion of the upcoming anniversary, there will certainly be a few more fans. Regular updates with new characters, challenges and landscapes, such as the Inazuma area released in the summer, provide new content. This means that players are always experiencing something new in the open world game.

New weapon in Call of Duty: Warzone – How to unlock the LAPA

Farming Simulator 22 – In the new trailer you can see...

Dead by Daylight – Cinematic trailer for the new chapter Hour...

New weapon in Call of Duty: Warzone – How to unlock...