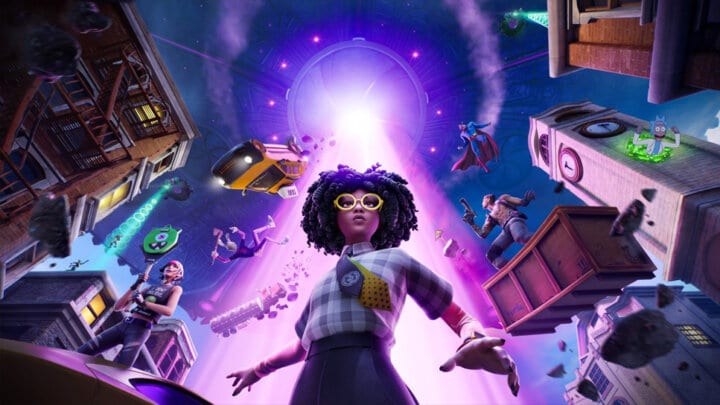 Control UFOs, put an alien on your head and save the world as Superman. Fortnite’s Season 7 is coming with some changes

An alien invasion, Rick and Morty, and Superman all in one update: Epic Games has packed the latest Fortnite patch full of content. Here are the most important information about Season 7.

The update is now playable and ends on 12 September. Story-wise, the Season kicked off with an alien invasion, including a giant mothership centred over the island. The population, of course, resists the invaders. The motive of the aliens is still unknown.

Looting in an innovative way

The mothership in the middle of the map is not just threatening decoration. If you approach the giant, it can kidnap players and pull them on board. There, the abductees can loot several chests for 15 seconds before they are thrown back onto the map.

For those who don’t fancy an alien abduction, there is another interesting loot mechanic. Llamas are no longer cardboard piñatas, but living animals that roam the map. If you attack a fleeing llama, it drops loot.

The Primal and Makeshift weapons from last season have now been removed from the game. Instead, there are now new weapons as well as other materials such as bolts and screws to craft equipment. For example, you can pimp an assault rifle, equip a rapid-fire SMG with a silencer or create your shotgun.

Next to the gigantic mother ship, flying saucers hover over the map. These can be captured and used as flying machines. If you play in a team, you can also simply pull your teammate on board with you in typical UFO hijacking style. If you steer towards enemies and explode the device, they take 70 damage.

There are also small aliens on the map. If you catch one and put it on your head, they take 40 life points from the player. The advantage, on the other hand, is that you can run faster and jump higher with the companions.

It’s getting swifty with the Rick-and-Morty crossover and Superman.
Season 7 also comes with a new Battle Pass. The main highlight is the skin of Rick Sanchez from the series Rick and Morty. In addition, Clark Kent alias Superman joins the fight against the aliens.

For the players who want to mingle with the aliens, there is the Kymera skin. There is a range of different head shapes, eye and skin colours, patterns and armour colours for the changeable alien. Thus, the alien look can be customised. To do this, alien artefacts must be collected, which are scattered in crystal chests across the map.

CoD Warzone: New anti-cheat will dig deep into your system

Baldur’s Gate 3: Patch 6 will be even bigger than all the others before it

CoD Warzone: New anti-cheat will dig deep into your system