Items in Diablo 4: What you need to know about uniques, legendaries and the Codex of Power How do loot, crafting and the item system work in Diablo 4? We answer all the important questions.

The release date of Diablo 4 is approaching with great strides, already in June we can finally dive into the dark world of Sanctuary and spend our nights hunting for the best loot.


But what does the loot in Diablo 4 actually look like? And what kind of items can we find? In this article we answer all the important questions about the item system in Diablo 4.

The most important answers about the item system of Diablo 4

What items can you equip in Diablo 4?

Each character and class has the same equipment slots where found items can be equipped:

With this, the equipment slots are again exactly as you already know them from Diablo 2 and Diablo 3.

What rarities do items have in Diablo 4?

The items found are divided into the following rarities:

Just like in the previous installments of the series, legendary and unique items will be rare at first. However, as you progress through the game and level up, you will be able to find special items more and more often.


Common items have no affixes, magical items have one affix, rare items have three affixes and legendary items have up to four affixes.

What are affixes in Diablo 4?


Affixes are the bonuses that items of rarity level Magic or higher grant to your character. Possible bonuses include more life, more primary stats such as strength or intelligence, more resistances or more movement speed.

What are Legendary Items / Legendaries?

Legendaries are much rarer than magic or rare items, but offer a great advantage: legendary affixes.

These affixes are sometimes very different from normal affixes, because they do not only grant your character stats. Some legendary affixes can change certain skills or massively strengthen certain builds. 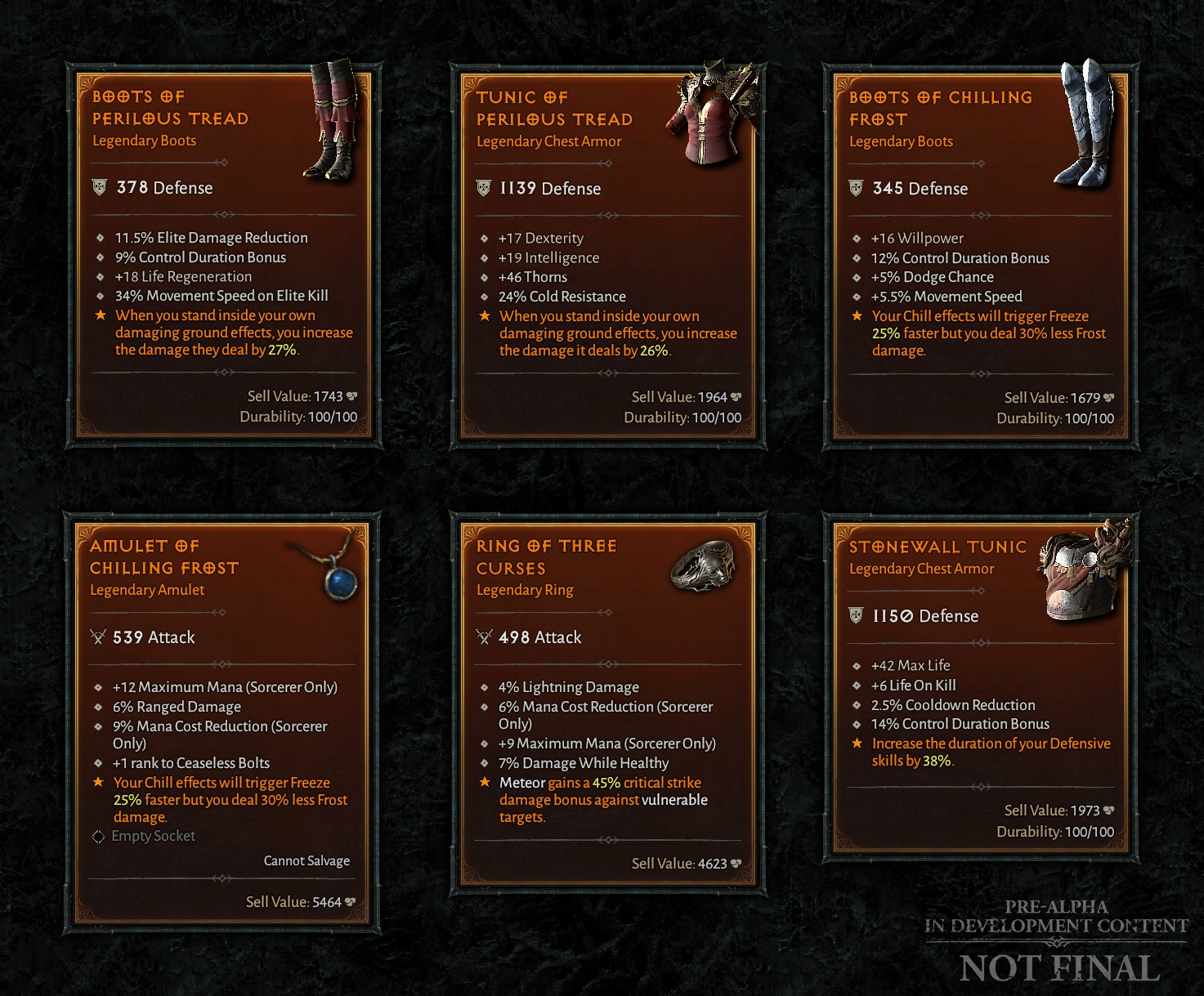 Blizzard has already revealed some Legendary Items during its quarterly updates, from which we can see sample effects:

You can find out what a skill Meteor is and what is meant by defensive skills in the skill overview for Sorceress.

What are Unique Items / Uniques?

Veterans already know the Uniques from the predecessors, unique items like the Harlequin Crown or the Stone of Jordan should be familiar to every series veteran.

What are the Unique Items?


These unique items not only have a special look, but also always have the same properties: the same affixes, the same sockets and the same unique bonuses.


These items are very powerful and most are specific to a Diablo 4 class. Through the December 2022 press beta, some uniques are already known. For example, the fan site (Maxroll.gg) describes three unique items they discovered during the beta.

Their unique effects are as follows:

What about the Mythic Items / Mythics and Sets?

Originally, Blizzard had planned to bring particularly powerful mythic items into the game. These could have had up to four legendary affixes per item. However, as already announced at the end of 2020, these were removed before the release and replaced by the Uniques.


The popular set items are also missing at release, as we have already reported to you. However, these are to be implemented later as part of the Live Service.

What does Item Power / Gegenstandsstärke mean?


For example: You capture a magic weapon that grants you extra strength. At low item strength, it may grant you 5 to 10 extra strength points, at a higher level 10 to 15.

As an example: You capture a magic weapon that grants you extra strength.


But not only the affixes, also the basic values like damage (for weapons) and armour (for armour) are influenced by the item power. So an ordinary weapon of the same type always has a higher basic damage with higher item power.

How can items be improved with crafting in Diablo 4?


There are several ways to improve your found items with crafting:

How does the Codex of Power work?

There are many dungeons in the Diablo 4 Open World. Each time you complete one, you will receive a new legendary affix that will be stored in your Codex of Power.


You can then have these legendary affixes imprinted on rare or legendary items by the occultist in town, rare items will become legendary.


However, this process has some disadvantages:

Hundreds of free demos from exciting players are available at the regular Steam Next fest. But these 8 are...
Read more
General

We show you the most exciting new games coming to Steam this week. Among the releases is the most...
Read more