Weapons from Call of Duty: Vanguard receive twice as many attachments in Warzone. Even two Perks can be selected.

Weapons from Call of Duty: Vanguard will have up to ten attachments in Warzone.  In addition, two Perks can be chosen. This was confirmed by two new weapons in Season 6.

Warzone fans can look forward to rich customisations for the Vanguard weapons that will be integrated into Warzone. Through the new Season, the STG 44 assault rifle and the M1 Garand have been patched into the game. Although the rifles cannot yet be used, fans have already taken a closer look at them.

As the CoD expert and YouTuber JGOD presented on Twitter, there are a total of ten different slots for attachments, five more than for the Warzone weapons. In addition to the usual attachments such as laser or barrel, Perks can also be selected. In total there are:

It is not yet known whether the Warzone weapons will also be revised and get more attachments.

CoD Vanguard: Everything you need to know about pre-orders.

New weapon in Call of Duty: Warzone – How to unlock... 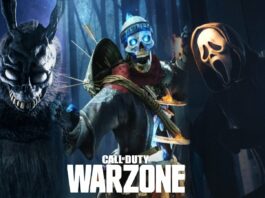 CoD Warzone: For the Halloween skins from Scream & Co. you...